Home Macedonia Head of state-owned MIA at an SDSM party event and stands for... 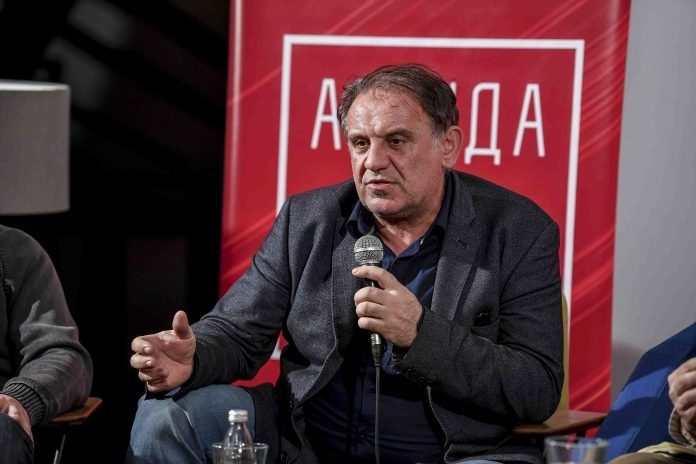 It is unknown in what capacity the head of the state-owned MIA news agency, Dragan Antonovski, attended a party rally of ruling SDSM on Tuesday, but what is disturbing the public is his suggestion that the government should control the television program. Antonovski, who was named MIA director by the current government, seated on top SDSM party officials, urged government institutions to control the television program before it was broadcast, something that is currently only happening in North Korea. Antonovski claims that he has very little control over the media that have received broadcasting licenses, asking whether the authorities have checked the program they are broadcasting, whether there is control over whether they have copyrighted content or their own media production. Dragan Antonovski, Director of the Media Information Agency, participated in the program debate “Agenda 20 – 24 – Open Government”, organized by the party that
nominated him to be the director of MIA, which should be a non-partisan and impartial agency.In the same performance, Antonovski gave another dangerous thesis, which raises the question of whether everything that was said by the Parliamentary Bureau shouldhave been transmitted. It is unclear how the director recognizes what is misinformation, and what will be the censorship committee that would assess and intervene in the moment, as parliamentary sessions are broadcast live.The SDSM party site also published information about Antonovski’s participation in the debate:”Antonovski emphasized the importance of journalists’ literacy.”It’s a segment that needs serious attention,” he said. It is very important to take into account the remarks of the Media Ethics Council and other associations. It is very important to see what the journalists and the profession are facing”, said Antonovski.Yesterday’s panel, moderated by Zoran Zaev’s adviser and National Coordinator for Strategic Communications in the Government, Marjan Zabrcanec, was also hosted by Robert Popovski, Minister of Communications, Transparency and Accountability, Kosta Petrov, Vice President of SDSM, Snezana Trpevska, RESIS Institute – Communications Researcher, Filip Stojanovski, Metamorphosis Foundation and Dragan Antonovski, MIA. SDSM’s information on Antonovski’s request for control of the television program on the following link:http://www.sdsm.org.mk/News.aspx?idNews=19594&lng=1