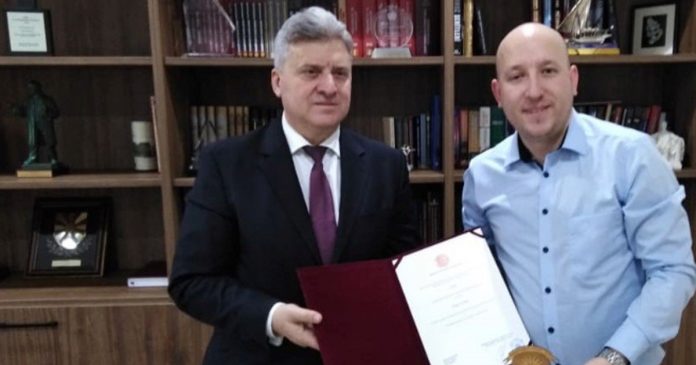 The President of the Macedonian Ilinden Society – Tirana, Nikola Gurgjaj, who has been visiting the Republic of North Macedonia for the past two days, met with former Macedonian President Gjorge Ivanov and personally presented him with the Ilinden Honorary Award.

– It was a great honor for me to meet with Gjorge Ivanov, former President of the Republic of Macedonia, and personally hand over the award to him. I wish him good health and a successful continuation of his mission,” Gjurgjaj told the Ilinden newspaper.

He pointed out that Ivanov welcomed all efforts, dedication and commitment of the “Ilinden” organization in order to promote the position and rights of the Macedonian national minority in Albania.

– I expressed gratitude for Ivanov’s attitude and commitment to the Macedonians in Albania during his two terms, for which I was very pleased to receive the award. I expressed hope that this cooperation will continue with Ivanov, who has good relations with former Albanian presidents, and that each of his commitments to the Macedonian national minority in Albania is welcomed and highly appreciated.