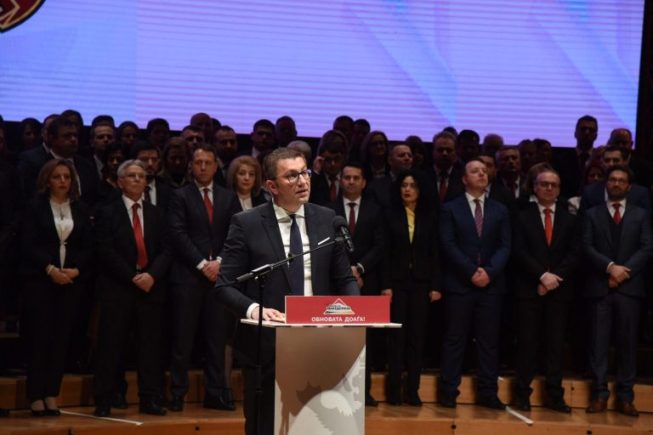 VMRO-DPMNE leader Hristijan Mickoski is neither a candidate nor a part of the MP
lists. He maintained that he should be a mandate holder, and although Zaev also
demanded that, the former prime minister refused to risk his MP seat when he lost
power.
And I am aware that many were telling me to go to the various election districts as
head of the list and I will say why I did not do it. Because I believe the lists propose
MPs, name and surnames with credibility whose place is in Parliament, not people
who will just promote themselves and seek the votes of the citizens and then go to
the government. I stand by all 120 candidates for MPs and I do not hide and I accept

this challenge and I am convinced of a great historic victory, the greatest victory.
That is why Zaev also escapes the idea of spitzenkandidat, the man is afraid and
runs away. He knows that even in the most pessimistic scenarios analyzed by
Bihacka, VMRO is convincingly winning. That is the truth why Zaev does not respond
to what he will do when SDSM loses the elections. Because he will seek to save
himself as an MP and occupy the SDSM leadership seat. It is his job and I will not
interfere with it. My goal is to defeat the incompetence and bring the state back on
the right track, said VMRO-DPMNE leader Hristijan Mickoski.