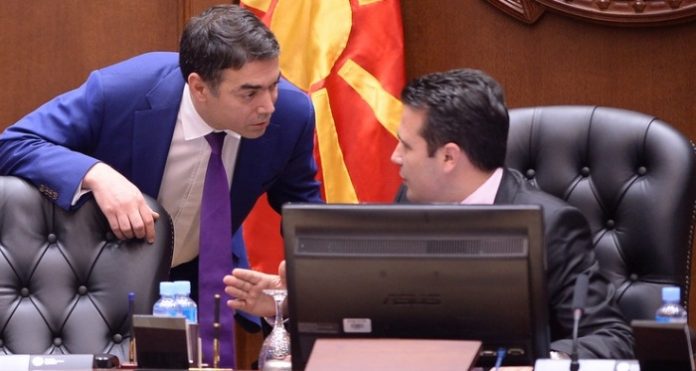 Zaev and Dimitrov are damaging to Macedonia, the Macedonian people, language
and everything that is an identity determinant, said VMRO-DPMNE in a statement.

-All permanent values ​​according to the SDSM government have a price, and it
depends on the market offer and their personal needs. This government is
bargaining and selling something that is not theirs, but has been built for
generations. Dimitrov, Zaev and Spasovski are hiding a document from the
Macedonian public that reveals Bulgaria openly conditioning the country’s
negotiations date. Macedonia is required to renounce the Macedonian minority, and
thus the naming of the Macedonian people as Macedonian. That SDSM does not
care about the citizens speaks for itself and the analysis of the Institute for Economic
Research Századvég, as of April 7, Macedonia decided to financially intervene in the
economy in the amount of 0.2% of GDP. Thus, Macedonia is among the European
countries that have invested the least money in the first month after the
announcement of the pandemic, according to VMRO-DPMNE.
The unilateral solutions accepted and implemented by the SDSM Government,
without democratic dialogue, consultation with the relevant political entities and the
wider expert public, cause serious damage to our country.
– Therefore, the future Government of VMRO-DPMNE will put a strong focus on the
development of the Euro-integration path, but will pay great attention to the
protection of identity issues, including the support of the Macedonian minority, living
outside the borders of the Republic of Macedonia. reads the party statement of
VMRO-DPMNE.