Home Macedonia Bosnia and Serbia condemn the publication of a Macedonian stamp with a... 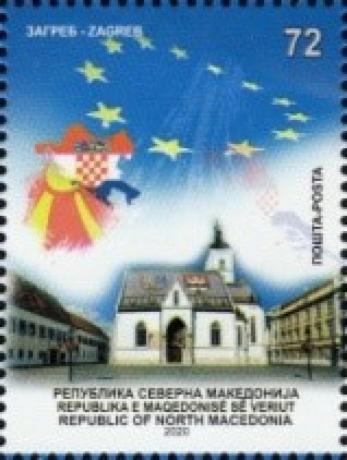 The Ministry of Foreign Affairs of Bosnia and Herzegovina on Saturday condemned the Macedonian state postal company for issuing an inappropriate postage stamp with the map of the Independent State of Croatia (NDH) from World War II, which was an ally of Fascist Germany.

The Ministry of Foreign Affairs of Bosnia expresses its concern because of the stamp that presents the Ustasha creation of NDH, including the territory of Bosnia and Herzegovina. We hope that this was an inadvertent mistake by the Macedonian Post Office and that the Macedonian Government will strongly condemn it, the Bosnian Foreign Ministry said.

Earlier on Saturday, Serbia issued a protest note to the Macedonian embassy in Belgrade, calling it an “attempt at historical revisionism” that “grossly disrupts bilateral relations” and cooperation and stability throughout the region.

“The Ministry of Foreign Affairs of the Republic of Serbia considers the publication of this post stamp on the day of the victory over fascism, as a hostile provocation against the territorial integrity and sovereignty of the Republic of Serbia, as well as an insult to the entire Serbian people who suffered in the concentration camps during World War II,”reads the protest note from Belgrade.