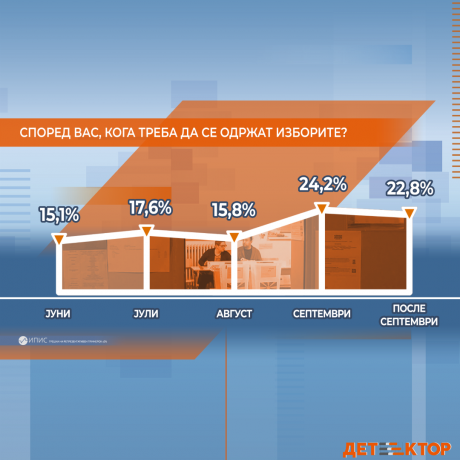 To the question “Did you plan to vote in the upcoming parliamentary elections before the coronavirus pandemic?”, 74.7% answered “yes” and 18.1% answered “no”.

According to the question “From today’s perspective, would you vote if the elections are held in late June or in the first half of July?” Citizens who responded “yes” were about 48.2%, while those who answered “no” about 35.1%.

But it is surprising that citizens prefer elections to take place in September. This is evidenced by the data of the poll conducted by “Detector”.

To the question “When do you think the elections should be held?”, About 15.1% opted for June, 17.6% for July, 15.8% for August, 24,2 percent of the citizens opted for September and additional 22,8 percent would rather have elections after September.