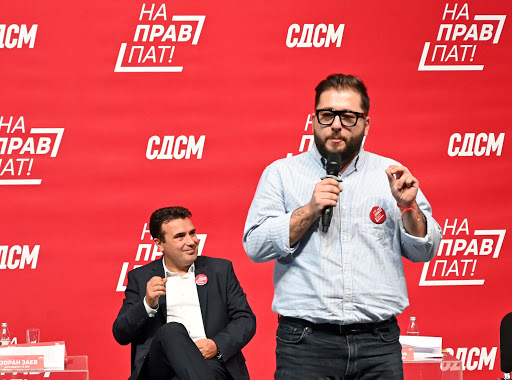 The Telma TV show &quot;Top Tema&quot; interviewed the vice president of the ruling party,
Kosta Petrov, who avoided directly answering the question of reporter Snezana
Lupevska Sozen whether his party SDSM will continue to distribute pre-election
leaflets after the high numbers infected with the coronavirus in the last few days.
It was announced a while ago that the entire parliamentary list of SDSM, i.e. 20
people, in the second constituency goes into self-isolation, after it was announced
that SDSM Vice President Muhamed Zekiri, tested positive to COVID-19. Earlier, the
holders of the list of MPs of the ruling party, Interim Prime Minister Oliver Spasovski
and PRO Director Sanja Lukarevska, confirmed that they are going to home
isolation, after they distributed pre-election material and flyers on Sunday to the
citizens stating the battle against the coronavirus was won.
&quot;Will you recommend another such meeting with the citizens, do you think it is good?
Now I am asking you as an expert PR, I am not asking you as vice president, and as
a person. Do you think that this is how we should continue to go through the cities, to
hand out leaflets in a situation like this with 89 newly infected people? Will you too go
and hand out leaflets?” Lupevska asked.
&quot;Unfortunately, the numbers are not what they should be. The numbers should have
been down by now. I hope that this growing number will not continue. My appeal is
that we all need to adapt, to respect the protocols. It is a fact that we will have to get
used to this. The fact is that we are all adapting, business is adapting, people are
adapting, political parties will also adapt. The most important thing is to respect
protocols, I think that is an absolute rule for all citizens and political parties,&quot; Petrov
replied.