Home Macedonia Mickoski in Negotino: 640 million euros in subsidies for farmers in one... 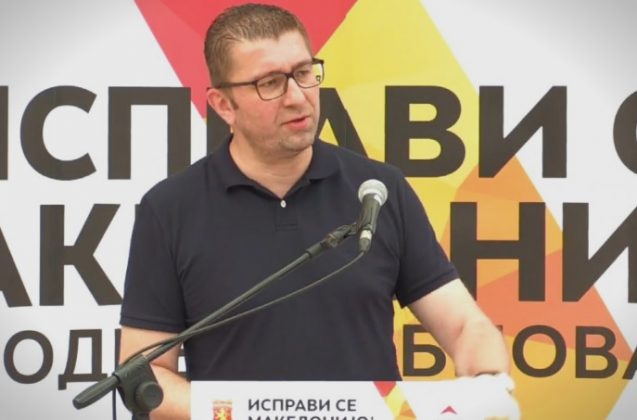 VMRO-DPMNE leader Hristijan Mickoski, during yesterday&#39;s visit to Negotino,
thanked those, who many years ago to this day, put brick by brick and board by
board so that they can stand before the largest and most organized political force in
Macedonia, the VMRO-DPMNE founders and veterans in Negotino.
– In the past few days, the campaign for the early parliamentary elections has started
and started in some specific conditions from what it was in the past, because we are
the only country in Europe that will never get out of the first wave of this pandemic.
We can&#39;t get out because unfortunately we have incompetent politicians, we have
political scientists instead of infectologists in the Commission for Infectious Diseases
who unfortunately the measures they implement not only did not bear fruit, did not
bring results but on the contrary worsened the situation. What is important is
respecting the measures on July 15 to come out en masse as it knows how to make
patriotic Negotino and punish this leadership of SDSM and Zoran Zaev, said
Mickoski.
In his address to the people of Negotino, Mickoski pointed out that it is enough for
the citizens to feel like second-class citizens in their own country, to walk with their
heads down, disenfranchised and said that all this will end on July 15 when this
leadership of SDSM and Zaev will be defeated.
– They could have done more, they just had to work harder, instead of enjoying their
leather armchairs, to step over those Persian rugs in the institutions. Instead of
enjoying those privileges, they should come down here with the people and talk

about what is bothering them. Instead of waiting for pre-election promises for
subsidies, for a guaranteed purchase, the Macedonian farmer could have made it
more dignified, to get it on time, as they promised in 2016 here in Negotino.
Instead of making grape growers proud, they made growers embarrassed who today
do not feel dignified about the work they put into their vineyards, said Mickoski.
During his visit to the citizens, the leader of VMRO-DPMNE said that the program of
VMRO-DPMNE is very carefully written with the support of experts from the
structures of VMRO-DPMNE, people from the Coalition for Renewal of Macedonia
and many other people who contributed to it.