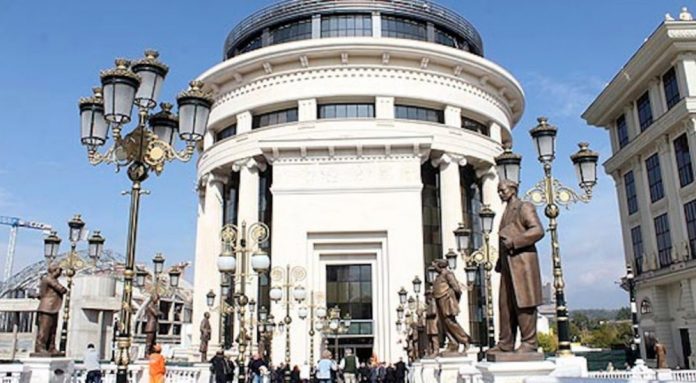 Since the beginning of the election campaign, several audio recordings have been leaked, from which it can be clearly concluded that there are indications of a crime. Among them, the one in which the controversial Montenegrin businessman Miodrag Davidovic Daka and the convict in the corruption case dubbed “Racket” Zoran Mileski talk stand out, and in which the leader of SDSM Zoran Zaev and the Secretary General of the Government Dragi Rashkovski are mentioned.

The conclusion from the recording is that in the period before the referendum to change the constitutional name in September 2018, the then senior government officials Zaev and Rashkovski took 300 thousand euros from Daka. Daka is a controversial Serbian-Montenegrin businessman, who is reported by the region’s media to be an exponent of Russia’s secret services and to have financed a failed coup in Montenegro before joining NATO.

The video was posted on social media on Saturday. The public has asked for answers, but so far there has been no information from the Public Prosecutor’s Office that a procedure has been opened to clarify who and why took the money. The response of the Prosecutor’s Office is that so far they are following the published recordings and if they determine the existence of elements of a crime, they will take actions.

However, experts on the situation in the Macedonian judiciary suspect that there will be an investigation into any of the published audio recordings containing or not elements of a crime.

“If you have an unreformed prosecutor’s office, an unreformed court, you can’t ask if it will work when it doesn’t work anyway, when with a clientelistic attitude it just turned over and changed the umbrella like a sunflower turned to the new political set and that’s obvious, that’s why it is difficult to say whether the prosecution will take action. It will not take anything, because it is not capable to take it because reforms have no responsibility, because the previous responsibility has not been determined, the games are the same, the same prosecutors, the same judges who played games and destroyed the system are still there,” says lawyer Zvonko Davidovic.

VMRO-DPMNE also demanded answers from Zaev about the allegations that he took 300 thousand euros from the businessman mediated by Milevski. They want Zaev to reveal to the public how many times he has met with Daka, but they suspect that the prosecution headed by Ljubomir Joveski will open an investigation into the case.

“Zoran Zaev must say how many times, where and when he met with Miodrag Davidovic Daka. How many meetings did he have with Daka alone, and how many with Dragi Rashkovski. At which meeting were 300,000 euros agreed for the referendum agreed? How did that money end up? At the same meeting, did he ask for 2,000 square meters for a gas station in Tetovo? Zoran Zaev must give answers to these questions before the competent institutions,” said VMRO-DPMNE spokesperson Naum Stoilkovski.

So far, Zaev has not responded to the indications of a crime resulting from the audio recording. Asked about the deals he allegedly made with the controversial and anti-NATO businessman Daka, Zaev called those talks “chit-chats”.