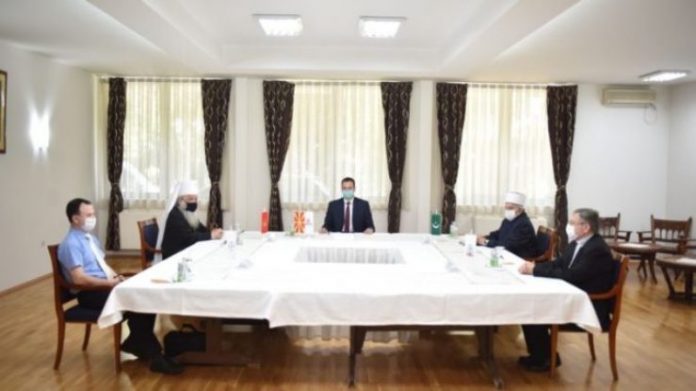 The leaders of the religious communities in the country unanimously called on all citizens to show responsibility toward themselves and toward their loved ones, also urging them to realize that the new virus is a real and serious threat to public health.

“They also called for peaceful, free and democratic elections in the interest of the country’s future,” the Commission for Relations with Religious Communities and Groups said Tuesday in a press release after a meeting of the leaders of the religious communities .The meeting, hosted by the Commission’s director, Darijan Sotirovski, was attended by the Macedonian Orthodox Church Head, Stefan, acting Reis ul Ulema of the Islamic Religious Community, Shaqir Fetahu, Catholic Church Bishop Kiro Stojanov, and Superintendent of the Evangelic Methodist Church, Marjan Dimov. The President of the Jewish Community Berta Romano Nikolic was not able to attend the meeting.

The religious leaders had a comprehensive discussion considering the gravity of the threat from the coronavirus pandemic and praised the tireless efforts of doctors and medical workers to curb the virus, stated the press release.

The religious leaders shared views on the challenges ahead and on everything that could have been done differently recently or more as a concrete contribution to tackling the adversity.
“Ahead of the July 15 parliamentary elections, the religious leaders also called for peaceful, free and democratic elections, while also discussing the importance to continuously foster a culture of tolerance, spirituality, respect in the relations between religious communities and with the public,” said the Commission.