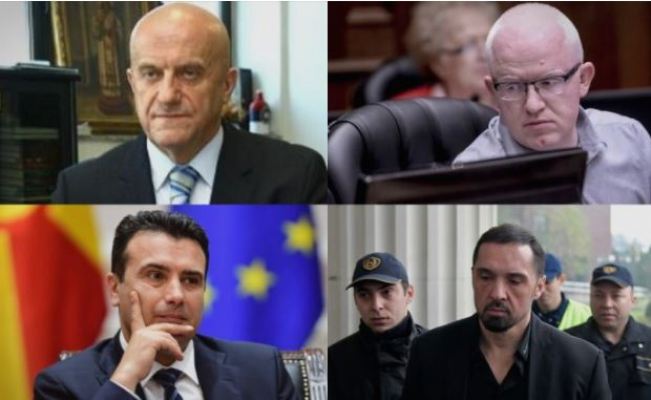 With his public admission that he paid 300 thousand euros for mediation in business
projects that he wanted to realize in Macedonia, the Montenegrin tycoon, Miodrag
Davidovic-Daka, is incriminating himself in a possible corruption scandal that is the
reason for being investigated by Macedonian institutions.
After public prosecutor Vilma Ruskovska gave the green light to Minister Nake Culev
and the police to look for evidence of a crime stemming from audio “bombs”
published on YouTube, the Montenegrin businessmen could be arrested upon
entering Macedonia.
One of the indications that Davidovic-Daka is part of a criminal scheme is the fact
that in his public reaction he himself admits that he paid Zoran Milevski-Kiceec 300

thousand euros for consulting, mediation, advocacy and negotiation for business
projects in Macedonia.
According to the Central Register in Macedonia, Zoran Mileski Kiceec has no
registered company for this type of activity (consulting, mediation, logistics and
advocacy), which may mean that the Montenegrin businessman gave the money in
hand, which according to Macedonian law is illegal.
Daka’s admission in his public statement contains at least two indications for the
crimes: one is “trading with influence” (because according to the audio leak Mileski
arranges him a meeting with Zaev and later the general secretary of the government
Raskovski is mentioned). The second potential offense is money laundering because
if there is no precise certified agreement between two legal entities and bank
transactions that show exactly why Daka is giving money to Mileski then the money
is transferred illegally outside the Macedonian legal channels.
In a statement for “360 degrees”, Daka explains his views on the published audio
bomb, for which he says everything is clean and does not publish the agreement
with which he enters into a formal-legal relationship with Kiceec.
The abovementioned information and indications and Ruskovska’s statement are
sufficient grounds for the Ministry of Interior to prosecute Daka as soon as he enters
Macedonia, to invite him to come for an informative conversation at the Ministry of
Interior or to ask the Montenegrin authorities to ensure his participation in the case
that the Macedonian judicial authorities will launch.
One of the measures that the Macedonian authorities can take during the procedure
to ensure his participation in clearing up the case is to freeze all assets, bank
accounts and financial transactions of companies and properties that Daka owns in
Macedonia.
Daka is considered one of the richest Balkan tycoons close to the SOC leadership
with close ties to the Kremlin. According to his statement, he owns huge property in
Macedonia.