Home Macedonia NDI poll: 44% of respondents believe that Macedonia is moving in the... 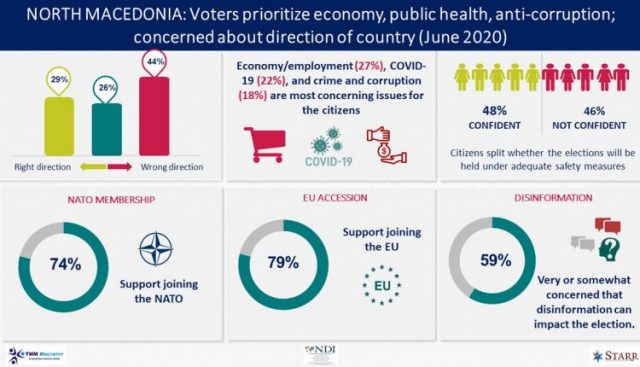 A new national poll conducted by the National Democratic Institute (NDI) in
Macedonia ahead of the official start of the July 15 parliamentary election campaign
shows that economic development is a priority for voters and they remain concerned
about the COVID-19 epidemic.
Since the start of the COVID-19 epidemic in March, the general public&#39;s impression
has been more pessimistic, with 44% of respondents saying the country is moving in
the wrong direction. In a previous poll (March 2020), 33% of respondents believed
that the country was moving in the wrong direction. Economy / living standards in
general, and employment in particular, are most important for one-third of
respondents. Another third says anti-corruption and other reforms in the area of ​​rule
of law are their priority.
Nearly a quarter say COVID-19 is their biggest concern.
– The survey reflects the basic continuity of public sentiment even before the COVID-
19 epidemic, especially for economic development and anti-corruption reforms.
Voters applaud NATO membership and the announced start of EU membership
talks, but the prevailing economic and health concerns shape their priorities in this
election, said Robert Scott Heaslet, senior resident director for the National
Democratic Institute for International Affairs (NDI) /North Macedonia.
Voter sentiment for the two leading parties/coalitions – SDSM/Besa and VMRO-
DPNME – has remained largely unchanged since the start of the COVID-19
epidemic, with close competitive levels of public support (9% of voters are
undecided).
– Voters in Macedonia know exactly their priorities that will lead them to the ballot
boxes. In narrow elections, they assess the political leadership and party policies

related to the rule of law and the economy that are most important to them, said
Robert Benjamin, director of the NDI/Central and Eastern Europe.
Nearly 7 out of 10 respondents say they will probably vote. Forty-one (41) percent of
all respondents are concerned about democratic election standards. Forty-six (46)
percent are concerned about health care measures, but for the most part this
concern has been reduced due to the announced protocols of the Ministry of Health.