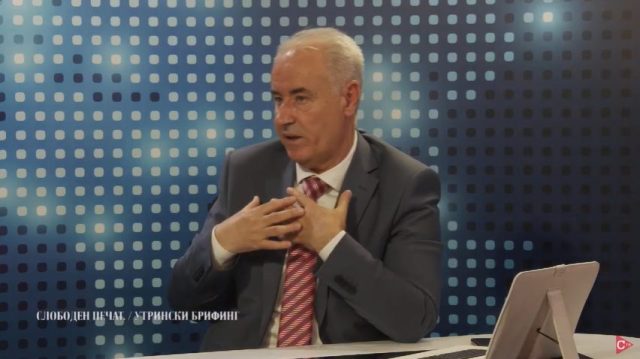 DUI leader Ali Ahmeti remains on the position that the party’s requirement for entering a coalition is the idea of an “Albanian Prime Minister” but the doors for talks over the formation of the future government are not closed, saidDUI’s PM candidate NaserZiberi in an interview with Slobodna TV.

“According to the information I have, Ahmeti is still keen on the idea of me being the next PM-designate and there are no concessions on this for the time being. Of course, all doors are not closed. In fact, the creation of a parliamentary majority is a result of talks,” ZIberi said.Ziberi was in the leadership of the former Party for Democratic Prosperity (PDP), then the only party of Macedonian Albanians that was a permanent coalition partner of SDSM until 1998.

On the possibility of SDSM and VMDO-DPMNE “giving each other” MPs in order to produce a coalition with other parties of ethnic Albanians, while sending DUI into opposition, he says being part of the next government is not the most important thing for DUI but adds that no one has the right to trade with the “heads” of the lawmakers.

“I cannot guarantee if this consensus will be maintained, but they are surely aware of the repercussions if they are part of the executive without having the legitimacy. The option of stealing MPs from left to right and vice versa would do the country no favors. We believe that the people’s will should be considered and Zaev, Mickoski or Ahmeti have no right to seek for MPs to form a government. The principle of a winner-winner coalition should be observed,” said Ziberi.