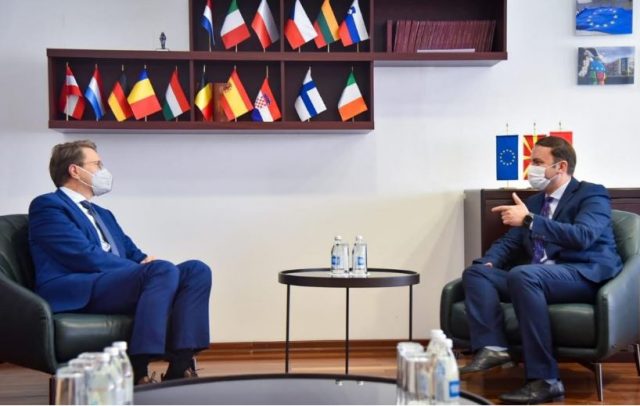 Deputy PM for European Affairs and chief negotiator with the EUBujarOsmanimet Wednesday with Samuel Žbogar, Head of the EU Delegation in the country.

The meeting focused on the recent elections and the post-electoral developments for the purpose of political stability of the country and the coming start of EU accession negotiations, the Secretariat for European Affairs said in a press release.

“In complex circumstances amid a pandemic, we held fair, free and competitive elections at which citizens demonstrated political maturity and confirmed the country’s European perspective,” saidOsmani and expressed hope that such European perspective would also be shown in the post-election period when forming the new parliamentary majority.

According to him, the country needs a stable and functional government with European perspective, which can adequately prepare and start EU accession talks, guaranteeing regional stability when solving important issues.

Osmani also voiced satisfaction from the EU consensus on the multi-annual financial framework, welcoming the 10-percent increase of funds for the Western Balkans. This reaffirms the fact that the Western Balkans is increasingly integrated in the Union, added Deputy PM Osmani.