Home Macedonia Mickoski: The government carried out a huge bribe with institutional money and... 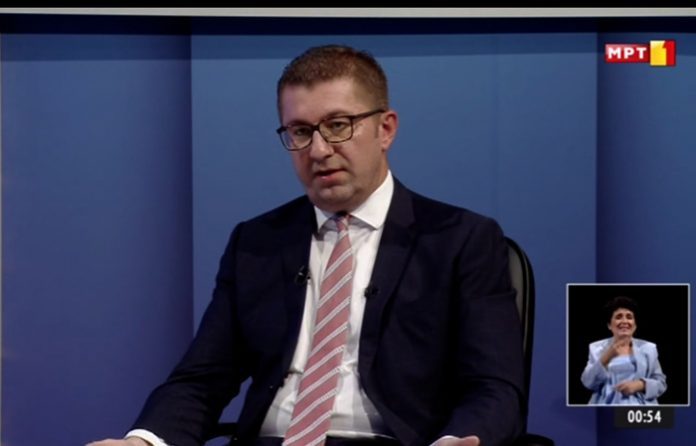 VMRO-DPMNE leader Hristijan Mickoski in his interview on TV Alfa’s “Sto ne e jasno” show accused that the government bribed the citizens with money within the institutions, pointing out the cards for people from social category, but also with cash in hand, citing the example in Kavadarci where a person who was given 12 million denars to bribe residents of the municipalities of Kavadarci, Negotino and Demir Kapija.

“In one of my last interviews I tried to explain the ways in which bribery is practically done, in a way it is done through the institutions and those cards that the public witnessed and also used. The line minister gave an interview a few days ago I think ,or wrote a Facebook status where he says that more than 300,000 citizens are users of those cards, which according to them should have been cards that will pass the crisis caused by the COVID-19 pandemic, somewhere around 300,000 cards were distributed with different value, at some 3,000 denars, at 6,000 denars at some 9,0000 denars, and according to her, it is about 28 million euros which are institutionally distributed, even during the elections,” says Mickoski.

“The elections were on Wednesday, literally until Tuesday the cards were distributed. Then they continued on Thursday, although we see now that some of those users practically have problems, i.e. they cannot use those funds, i.e. no funds have been paid. Furthermore, there is a project called green oil, where we have a case in Bitola where a senior SDSM official distributes cards to farmers and practically tries to condition them for whom to vote and somewhere our assessment is that about 10 million euros are distributed outside the institution or we say money on hand where it is distributed literally throughout the country. An example that is said on the sidelines is in Kavadarci, for example, where a person who was supposed to distribute 12 million denars for a bribe in Kavadarci, Negotino and Demir Kapija took the money that was intended for a bribe and then disappeared. A few days later, a group came from the hometown of the president of a political party, so that group failed to find him and immediately brought another 12 million denars,” said Mickoski.