Home Uncategorized Government in which Spasovski is Minister of Interior guarantees the rule of... 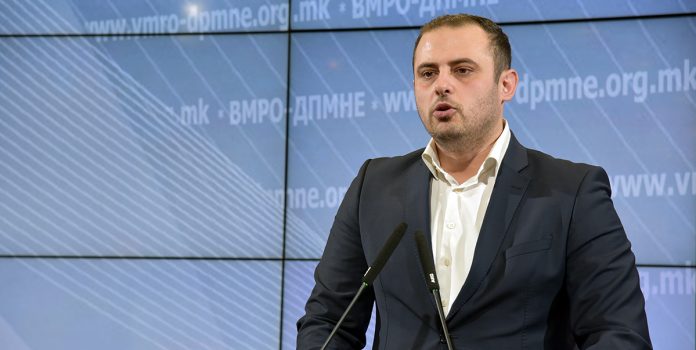 A government in which Oliver Spasovski is Minister of Interior can only guarantee new scandals and the rule of crime in the Republic of Macedonia. Oliver Spasovski will be remembered as a minister who, instead of fighting, protected crime in our country during his entire term, said VMRO-DPMNE ‘s Orce Gjorgjievski at today’s press conference.

“Unsolved murders, mafia fights in the streets, robberies on a daily basis, and crime hike as well as insecurity among our fellow citizens. Macedonia has become the most corrupt country in which mayors from the government turned into local sheriffs who smuggled cigarettes or beat citizens in their offices under the auspices of the institutions… He names his own cousin as the head of the border police, and also in the case of procurement of cars without a tender from the Kumanovo company donor to SDSM with money from a Czech donation. The scandalous procurement of passports worth 20m euros was also followed, as well as the wiretapping scandal in the public prosecutor’s office, which was never cleared up. Spasovski was and is a disgrace to the Macedonian police because he allowed the case to be covered up when the policewoman allegedly only suffered tow truck injuries, thus directly defending the people who humiliate and attack the officials and for that they remained unpunished,” said Gjorgjievski.