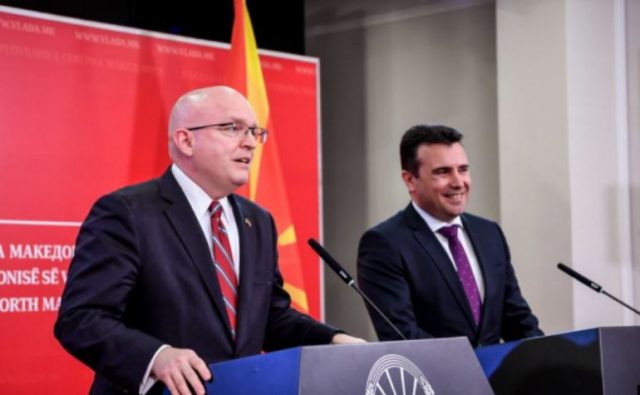 We encourage you, and EU member states, to continue to resolve bilateral disputes outside the EU accession process while aspirants simultaneously progress through the opening and closing of chapters, says United States Assistant Secretary of State for European and Eurasian Affairs Philip Reeker in a letter to Prime Minister Zoran Zaev.

“We appreciate your effort to negotiate in good faith, and to maintaining your commitments to secure the European future North Macedonia has proven it deserves,” says Reeker.

He notes that the United States remains committed to supporting North Macedonia’s further European integration and expresses disappointment that EU member states failed to reach agreement on approving a negotiating framework for the country.

“Your country has proven itself as a confident new Ally in NATO and a great friend to the United States. EU accession remains a critical mutual interest and we will continue to advocate with our European partners in support of holding the intergovernmental conference for North Macedonia during the German EU Presidency,” says Reeker.

He adds that the U.S. understands the challenges associated with working through intricate disputes, saying North Macedonia is no stranger to doing hard work necessary to achieve greater peace and prosperity for itself and its neighbors.

“You proved this in securing the historic Prespa Agreement and by laying the foundation for a stronger relationship with Bulgaria through the 2017 Friendship Treaty,” says Reeker.

The Assistant Secretary of State says the United States will continue to support these endeavors and hopes that North Macedonia’s hard work results in continued progress on the country’s EU accession path.

“We remain your partners, and we are optimistic that an intergovernmental conference marking the start of North Macedonia’s negotiations with the EU will be held soon,” underlines Reeker in a letter to Zaev.