Home Macedonia Szijjártó: The week starts with the leaders of our Macedonian sister party 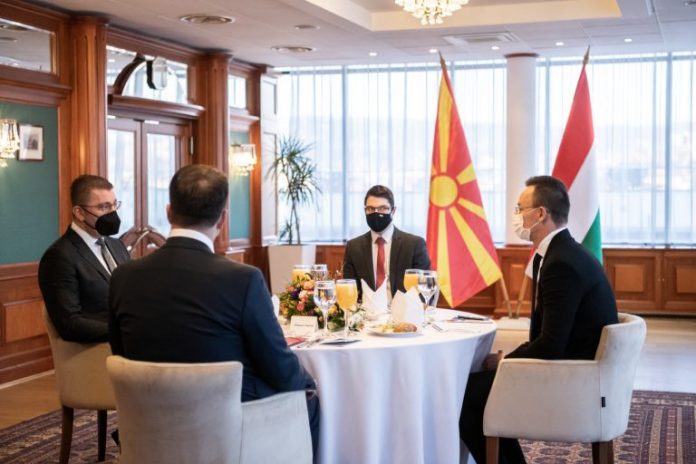 Hungary’s Minister of Foreign Affairs of Hungary Péter Szijjártó informed via Facebook about the meeting with VMRO-DPMNE delegation led by Hristijan Mickoski on Monday.

Szijjártó, whose Fidesz party has close relations with VMRO-DPMNE within the group of European People’s Parties, stressed the importance of European integration for the countries of the Western Balkans to have widespread support.

“The week starts with the leaders of our Macedonian sister party. It is important that European integration enjoys widespread support in the countries of the Western Balkans,” Szijjártó wrote on Facebook.

VMRO-DPMNE leader Hristijan Mickoski has announced earlier that he will also meet with Hungarian Prime Minister Viktor Orban and Slovenian Prime Minister Janez Jansa as part of his mini-diplomatic offensive with sister parties in the region and Europe, VMRO-DPMNE said.

“Regardless of the fact that VMRO-DPMNE is in opposition, we should use all available potential to make some kind of pressure and move towards the path of the European Union (EU),” Mickoski said, quoted in the party statement.