Home Macedonia Nikoloskimeets withSzijjártó: We are working on intensifying the cooperation between VMRO-DPMNE and... 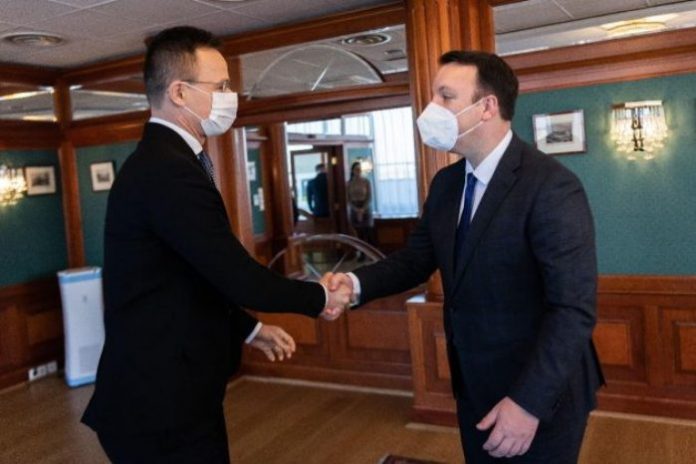 VMRO-DPMNE Vice President Aleksandar Nikoloski met with Hungarian Minister of Foreign Affairs Péter Szijjártó. The meeting comes as a continuation of the previous diplomatic visit that a delegation led by the VMRO-DPMNE leader Hristijan Mickoski had with the top of the Hungarian government, as well as in order to realize the efforts to start negotiations between Macedonia and the EU, intensifying cooperation parties VMRO-DPMNE and Fidesz and deepening of relations between Macedonia and Hungary.

At the meeting Nikoloski – Szijjártó discussed the deepened cooperation and strengthening of the capacities of the two sister parties Fidesz and VMRO-DPMNE within the family of the European People’s Party, as well as the continuation of efforts to unblock the road to the European Union.

Vice President Nikoloski stressed that it is extremely important not to waste time with the integration of Macedonia and any support and lobbying of friends such as Hungary is very helpful.

The high level of corruption, as well as the unpunished crime confirmed by Transparency International is a signal that the Government of Macedonia is losing its priorities, but also that all this must not make the state and the citizens hostage to the incompetent government.

It was concluded that Macedonia is the time to start negotiations immediately, and the support is comprehensive from Hungary, at the same time the Government should ask for such support from all friendly countries on European soil.