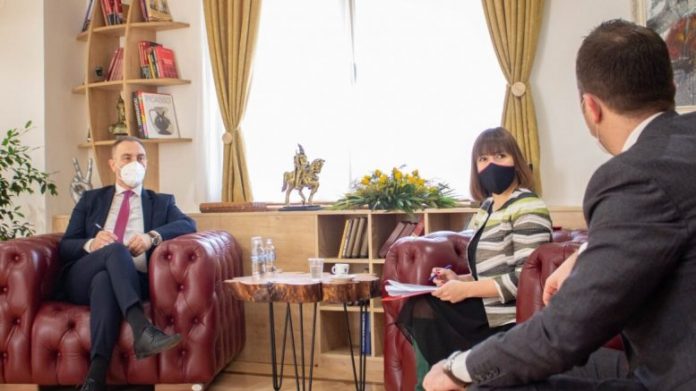 First Deputy PM and Minister of Political System and Community Relations Artan Grubi held a working meeting on Thursday with Minister of Education and Science Mila Carovska and former Education Minister and current MP Arber Ademi, during which they discussed education reforms and the law on elementary and high school textbooks.

The three interlocutors, Grubi’s office said in a press release, agreed that in line with the law on elementary and high school textbooks all textbook errors should be reviewed and corrected, starting with the geography textbook for high school sophomores.

Grubi, Carovska and Ademi noted that Article 26, paragraph 2 of the textbooks law should be enforced in this and similar cases.

“This section of the law says that textbooks which contain information that offends the history, culture and values of all citizens of North Macedonia should be discontinued” the press release read.

Grubi’s office said that participants agreed during the working meeting that all textbooks should be reviewed in the upcoming period to put an end to inconsistencies. The opposition Albanian party Alliance of Albanians shared segments from a geography textbook which stated that many of the oldest Albanian families in Macedonia were Macedonians or Turks, Roma and Cerkezi who adopted Islam and later the Albanian language, and that much of the settlement of Albanians in Macedonia was done forcefully under the Ottoman Empire, with the Turkish beys eager to have Muslim settlers in the largely Christian region.