Home Macedonia Taseva and Nikolovska agree – Macedonia is a country captured by the... 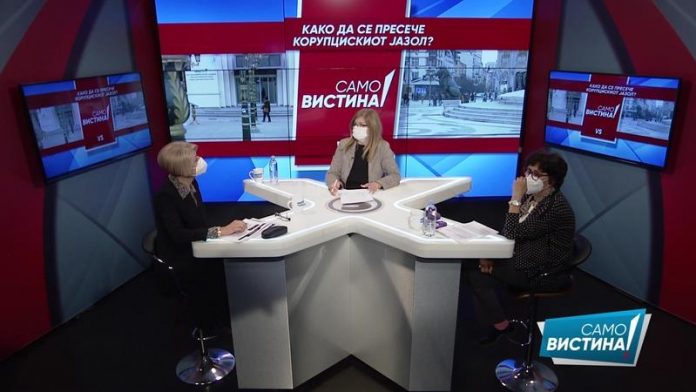 Reports indicate that there is a problem in acting before the judicial authorities. If we break down the whole situation and see exactly the reasons or determine the reasons why certain actions before the court were detected as unfair actions, it is not very difficult to find a way where it may lead to the beginning of an investigation into certain corrupt practices, said Margarita Caca Nikolovska speaking about the Transparency International report on the “Samo Vistina” TV show.

Nikolovska added that there were very few cases of corruption in Macedonia and that is a big problem that indicates evasion of corruption.

“The state of a captive state and the non-functioning in the Constitution established division of powers into legislative, executive and judicial, where one center is politically controlled, the judiciary is controlled, the Parliament is controlled, the executive is controlled, there is no system of mutual control – a system we call national integrity. In other countries, court decisions are a correction of the decisions of the executive, because the judiciary and even the Constitutional Courts are the ones who should react immediately and protect citizens in terms of protecting their rights in court proceedings. And in our country, the attitude of judging what has to do has begun to prevail,” said Slagjana Taseva, head of Transparency International – Macedonia, talking about why Macedonia in was listed as a captive and corrupt country in the Transparency International report.