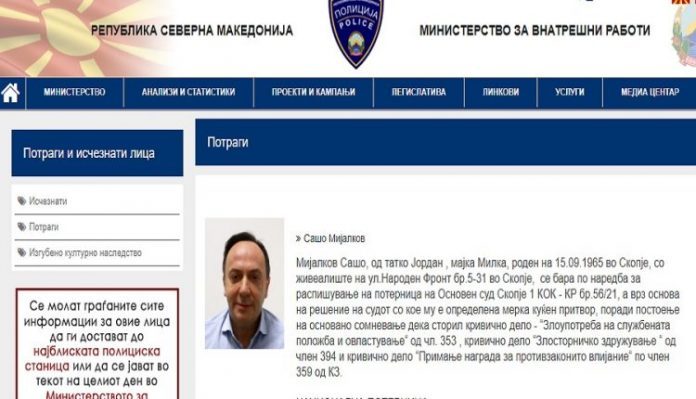 The Ministry of Interior (MOI) has officially issued a national arrest warrant for UBK former director Sasho Mijalkov, who has been missing since yesterday afternoon after the police asked him to hand over the house arrest decision.

“Mijalkov Sasho, father Jordan, mother Milka, born on 15.09.1965 in Skopje, with residence on Naroden Front Street No. 5-31 in Skopje, is wanted by an order for issuance of a warrant to the Basic Court Skopje 1 KOK – KR No. 56/21, and on the basis of a decision of the court with which a measure of house arrest was imposed on him, due to the existence of reasonable suspicion that he committed a crime – Abuse of official position and authority under Art. 353, criminal offense of criminal association under Article 394 and criminal offense ‘Receiving a reward for illegal influence’ under Article 359 of the Criminal Code,” reads the announcement of the Ministry of Interior.