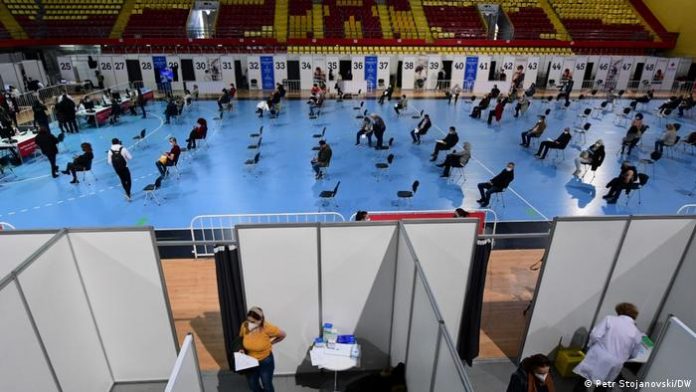 The vaccination process in North Macedonia is going well. So far, some 25,000 citizens have been inoculated at the Boris Trajkovski Arena. In line with the national immunization plan, Tuesday marks the end of the vaccination of frontline workers. Starting Wednesday, the rest of the 20,000 Sputnik shots will be allocated by age groups, Health Minister Venko FIlipche said on Monday.

He added that the rest of the Sputnik jabs will be administered same as AstraZeneca ones, at vaccination posts.

Minister Filipche called on citizens to apply for vaccination via the website vakcinacija.mk.

“Moreover, they can also sign up through their family practitioners, who are tasked with polling their patients, especially senior citizens, who should express interest in vaccination. Starting Wednesday immunization by age groups will resume,” Filipche added.

According to the Minister, essential workers, who are directly involved in managing the crisis since the beginning have been fully inoculated. These include employees in: the Interior Ministry, the Army, schools, the Labor Ministry, the judiciary, Parliament. He underlined expectations that the Parliament Speaker will express interest in vaccination of MPs.

Some 600 journalists over 40 and those with chronic illnesses are getting vaccinated on Monday. Their vaccination was organized by the Association of Journalists of Macedonia (AJM), the Independent Union of Journalists and Media Workers (SSNM) and the Ministry of Health.