Home Macedonia Mickoski: Citizens came out to support the people who defended the Constitution,... 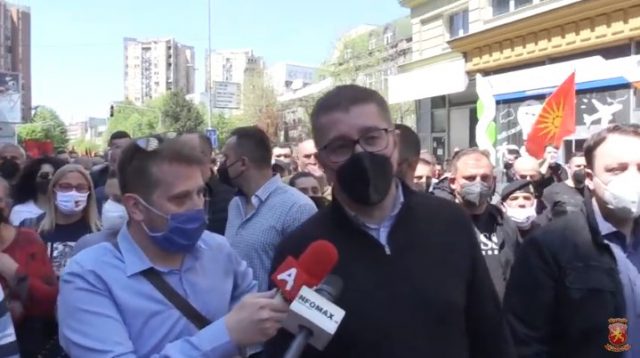 The protest is practically a reflection of the overall situation in the society, the people are dissatisfied. Today, the citizens came out in support of the people who defended the Constitution, VMRO-DPMNE leader HristijanMickoski told the media.

Earlier, the opposition party supported the mass protest on Sunday demanding the release of those convicted of the intrusion in the Parliament on April 27, 2017, when TalatXhaferi was appointed Speaker of Parliament with different interpretations of the Rules of Procedure to fulfill the condition of DUI to support SDSM and ZoranZaev to form a government.

This was followed by the introduction of bilingualism and the change of the constitutional name of the country, which was opposed by many citizens who protested for tens of days in front of the Parliament to destroy the unitary state, including the sentenced, who entered the Parliament on the critical day to stop the illegal appointment of Xhaferi.