Home Macedonia Filipche claimed that the documents were fake, this is evidence of payments... 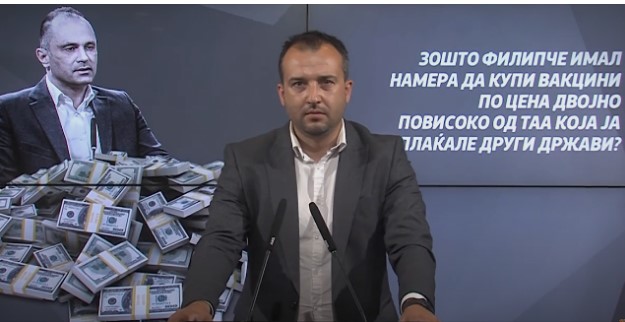 If it is still not clear why we waited for five months for vaccines, the answer is because while ministers around the world were chasing vaccines, Filipche and Zaev were probably chasing commissions. The saga with the Chinese vaccines ended with thousands of lost lives, said VMRO-DPMNE MP Mile Lefkov at a press briefing.

“On March 13 I announced that Filipche, instead of the regular route, had started procuring vaccines through a phantom company from Hong Kong – the Hong Kong-based Stabri International, which the Ministry of Health and Venko Filipche first claimed were not exists, and then that the documents we publish are false and inaccurate. We have released documents showing that the total value of the 200,000 vaccines to be procured would be $ 12.5 million, which is $ 62.5 per vaccine. That is twice the price paid by other countries. Filipche denied and justified himself. A whistleblower submitted documents to VMRO-DPMNE, which show that the payment was made. This is an Order for making payments abroad made with a letter of credit in the amount of 7,800,000 US dollars, the payment was made by the Ministry of Health, in which the Minister is Venko Filipche, through an account in the NBRM from budget funds, and the recipient is Stabri International. 7.8 million US dollars, which is about 60% of the 12.5 million US dollars, as much as the information in the media that it would be paid for 200,000 Chinese vaccines, so we got a unit cost of one vaccine of 62.5 US dollars, and that is twice as much as the amount that came out as information that was paid by other countries,” said Lefkov.