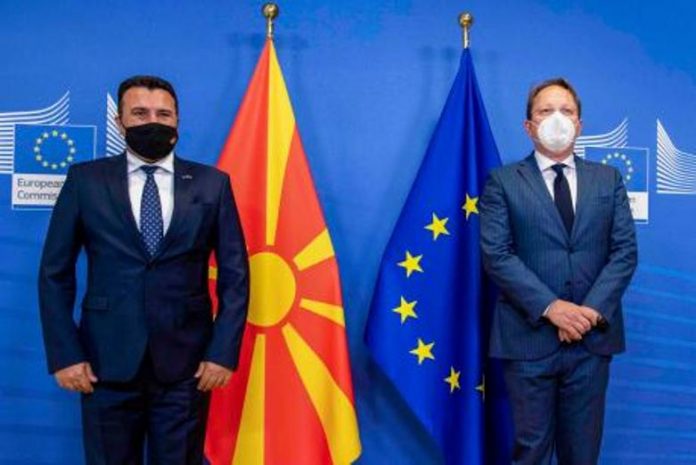 Prime Minister ZoranZaev met Monday in Brussels with the European Commissioner for Neighbourhood and Enlargement OlivérVárhelyi and agreed that identity cannot be a reason for blocking North Macedonia’s EU accession bid.

European Commissioner Várhelyi welcomed the Macedonian delegation and underlined the aim of the European Commission during Portugal’s EU Presidency is to approve negotiating framework with North Macedonia and holding of the first intergovernmental conference that will signal the official launch of accession talks, the government press service said.

Várhelyi added that the EU is committed to the Western Balkans and that today, after 2.5 years, the Foreign Affairs Council is holding a strategic discussion on the Western Balkans and unblocking North Macedonia’s EU path is the number one priority. Brussels is making every effort and supporting all ideas for solutions in order to unblock this process, he added.

PM Zaev at the meeting said that he highly appreciates these efforts of the European Commission, adding that the technical government in Bulgaria may be an opportunity for reaching a solution soon, but he expects that the other side will be encouraged for openness, readiness and commitment to finding a solution.

“We are ready for talks, we believe that we should make another attempt in the coming period, but our colleagues in Bulgaria and everyone in the European Union should know that we will neither talk nor negotiate about our identity and all attempts to put it forward on the negotiating table will be rejected by the Macedonian side,” Zaev noted.