Home Macedonia Zaev – Silvestri: Italy shows support for Macedonia, the country did its... 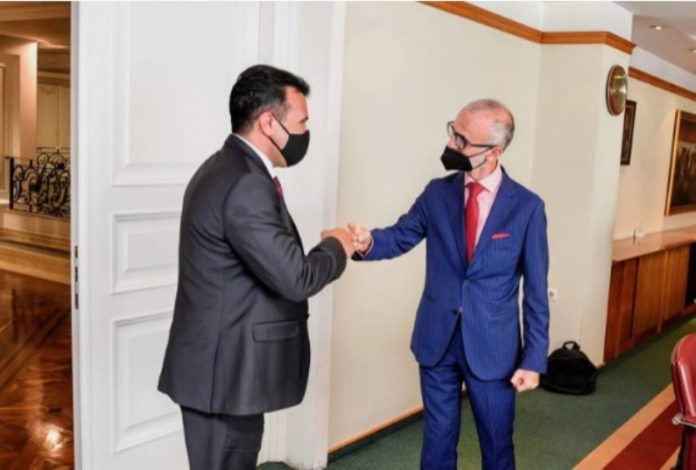 Macedonia has met its obligations and now it is the EU’s turn to evaluate the country’s achievements, Prime Minister Zoran Zaev and Italian Ambassador Andrea Silvestri agreed after their meeting on Thursday.

“We continue implementing the reforms at home,” PM Zaev said, “strongly committed to a functional rule of law. Regarding the talks with our neighbor, the Republic of Bulgaria, we remain focused on being constructive in the talks.

“What we also said in Brussels is that we accept to talk about anything except who we are.”

According to the Government’s press service, Zaev and Silvestri expressed their hope that a creative approach would make it possible to hold North Macedonia’s first intergovernmental conference with the EU during the Portuguese Presidency.

Most importantly, the message the EU would send to the Western Balkans by holding the conference would be that it remains focused on enlargement.

Zaev and Silvestri concluded that a functioning Parliament was necessary for the progress of the country and its citizens, noting that this would require constructiveness from all political stakeholders.

PM Zaev expressed gratitude to the Italian Ambassador for the solidarity shown by the Republic of Italy and the EU regarding Covid-19 vaccines. Silvestri agreed that solidarity is one of the best ways to deal with the consequences of the pandemic.