Home Macedonia Opposition accusesthat the SV Investcompanyrelated to a racket in REK Bitola was... 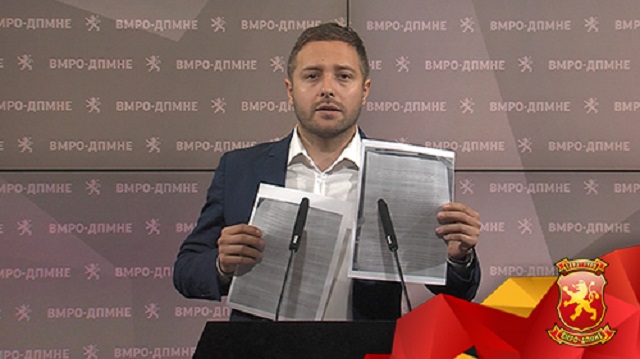 The renowned company SV Invest owned Stole Chifligaroski, one of the people who with Vice Zaev took away tenders of companies you won in REK Bitola and sent people with VaskoKovachevski who is the director of ELEM to Vice to pay a racket despite the millions earned in REK Bitola, this company owned by Stole Chifligaroskion March 22 this year announced the start of bankruptcy proceedings.

It practically goes bankrupt and shuts down. A company that from year to year its profit grew by 50, 100 and 200 percent, and in 2019 earned 2.5 million euros in taxes, has started bankruptcy proceedings for outstanding claims of just over 250,000 euros. This document shows the decision to initiate bankruptcy proceedings, and this document shows the explanation why for an outstanding debt of 16.5 million denars or slightly more than 250,000 euros. These are the two documents that determine the bankruptcy procedure, said VMRO-DPMNE spokesperson DimcheArsovski at today’s press conference.

Arsovski reminded that Stole Chifligaroski, the owner of SV Invest and indirectly Vice Zaev, through SV Invest tried to extort a tender, without fulfilling the conditions to win the tender, from a company that received it on a public call in REK Bitola and to do damage to the company to which they extorted the tender of just over half a million euros. Additionally, the same people demanded 250,000 euros in cash from the owners of the company and take the money toStrumica.