Home Macedonia Mickoski to meet with MEP and head of the delegation of the... 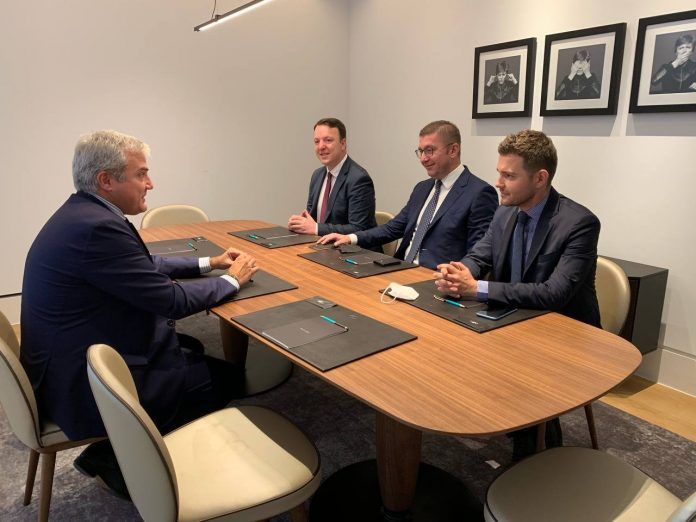 VMRO-DPMNE leader Hristijan Mickoski, along with party Vice President Aleksandar Nikoloski and Secretary for International Cooperation Timcho Mucunski, during a working visit to Brussels, met with Marco Campomenosi, Member of the European Parliament and head of the delegation of Salvini’s Lega party in the European Parliament.

Mickoski and Campomenosi talked about deepening relations between the two parties and countries, after which he stressed that Macedonia, wanting progress, must remain on the path of European integration.

At the meeting, Mickoski stressed that the criteria for starting negotiations with the EU were met in 2009, and what is new is unfortunately the dispute with Bulgaria, which arose at a time when Zoran Zaev is prime minister, who claimed that he had closed all open questions, and here we see today, unfortunately, that dispute is an insurmountable obstacle. . Despite the fact that Macedonia has serious problems with the growing level of corruption, poverty, and lack of reforms in education and health, which were the main promises of Zaev and did not materialize, we are still in Brussels to demand the unblocking of Macedonia,” said Mickoski at the meeting.

He also said that the government, instead of spending time on self-pity and a policy of unjustified flattery towards the eastern neighbor, should use all connections and serious acquaintances with Brussels to unblock Macedonia’s European path.

In terms of deepening relations between the two parties, President Mickoski invited the President of Lega, Matteo Salvini, to visit Macedonia and would be honored and pleased to host it. The stay continues with the presence of the Parliamentary Assembly of the European People’s Party, which includes all center-right parties in Europe, such as Angela Merkel’s CDU, the HDZ of Croatia, the People’s Party of Spain, the Moderates of Sweden and many others.