Home Macedonia Milanovic: It is wrong and immoral to dispute identity, right to name... 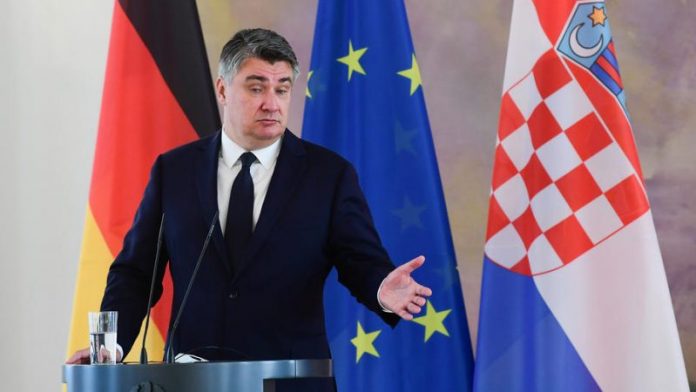 The statement of the Portuguese Secretary of State is a result of ignorance and carelessness. I do not want to be careless in my statements, because I may harm Macedonia. The EU has long been not a community of some uniform values, but of some similarities and as soon as we realize that we will go to the EU. If we do not understand it, we will go back, because the EU has its own limits that can be reached. Certainly one cannot go beyond the limits of nation states, Croatia’s President Andrej Milanovic told a joint news conference with President Stevo Pendarovski in Zagreb on Wednesday, answering a reporter’s question.

According to Milanovic, when entering one’s intimate space, in delicate matters such as identity, the right to a name and the right to a language, it does not end well, especially if, as he stressed, the motives are opportunistic.

“What will happen if Croatia questions the Montenegrin language? Both Bosnia and Herzegovina is our neighboring country and it is difficult to deny someone the right to be called by a name and to call a language by that name. So it would be a normal thing for me, what would it be like to challenge the Bosnian? That is wrong and immoral. The Montenegrin language as well. It is part of the identity of that country,” says Milanovic.

The Croatian head of state assessed that Macedonia and Albania are being held at the doorstep of the European Union in a “rude way”.

“Macedonia and Albania should start accession negotiations as soon as possible and it will not be easy. Such messages are discouraging, even discriminatory, Milanovic said.