Home Macedonia Mickoski presents the “Macedonia for All” concept: Cleaner air, the money from... 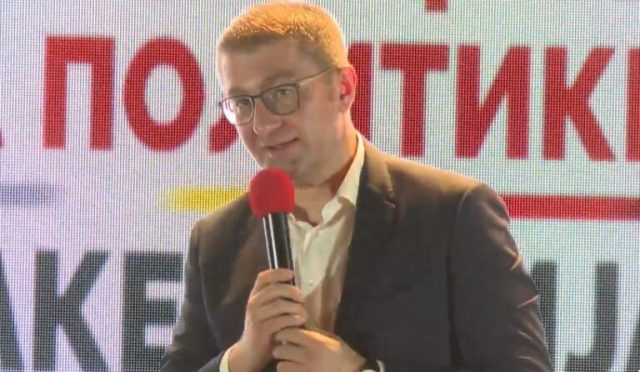 VMRO-DPMNE leader HrisitjanMickoski at the forum “Policy Promotions – Macedonia for All” in Gazi Baba presented the concept “Macedonia for All People” whose policies provide cleaner air, return of excise tax on fuels that instead of the government to spend and steals, will be returned and intended for projects for all citizens, as well as cheaper electricity for households and extension of the life of REK Bitola and REK Oslomej until 2040 through modernization and investment via new methodology.

“In the concept of “Macedonia for All” not only will we have new policies but we will offer solutions, we have a clear methodology on how to increase electricity production which is now somewhere around 60% of what it was in 2017, our methodology is modernization and investment in ecological filters and desulphurization in the two largest production stops it is REK Bitola and REK Oslomej and extension of their lifespan until 2040, something that is contrary to what is promised by SDSM and ZoranZaev “, said Mickoski.

“The highest percentage of ambient air pollution comes from the heating system of our homes, by changing the system, i.e. by using the gas that will be provided by the future municipal and city government, each household will have the opportunity to choose a free gas connection that the future municipal or a city utility will carry it to every household, the plan is for a four-year term for at least 50% of households to receive a free gas connection, thereby changing the heating system of households, and thus to have cleaner air, and thus to have healthier fellow citizens,” said Mickoski.