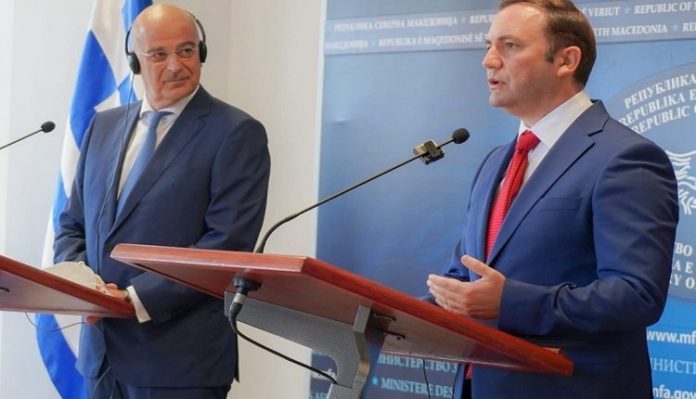 The Prespa Agreement is not questioned by the fact that Greece is not fulfilling some of its obligations, such as the adoption of the three memoranda and the change of the boards, said Foreign Minister Bujar Osmani after meeting with Greek counterpart Nikos Dendias in Skopje.

“The issues we raised regarding the ratification of certain agreements and memoranda in the Greek Parliament were opened by me at the meeting and the issue of traffic signs in Greece and we discussed the technical reasons for non-fulfillment of those issues in the Greek Parliament and agreed on how be done in the following period. Regarding the boards, the explanation is that the local authorities are the ones who do not show enthusiasm, but regarding that issue we talked more widely and I think that in the coming period there will be a solution for that,” said Osmani after the meeting.

“Many recent steps have been taken, one of which is the removal of the sign in front of the building in which we are located, placed during other times and represented King Philip, the father of Alexander the Great, because we agreed together that your ancestors had not yet arrived in the Balkans and they did not have the opportunity to fight under Alexander the Great in the depths of Asia, the name of the Archaeological Museum has been changed and the signs at the border crossings have been changed,” Dendias said.