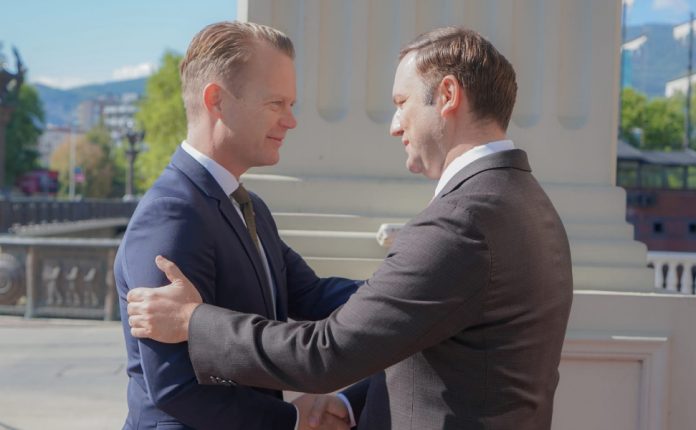 Denmark thinks that North Macedonia is ready to start accession negotiations with the European Union. I hope that the decision will be made later this year or as soon as possible, backed by all 27 EU member states, Denmark’s Minister of Foreign Affairs Jeppe Kofod, who is paying an official visit to N. Macedonia, said on Wednesday.

Denmark, he added, stands behind N. Macedonia and supports the reforms the country has implemented in the past few years, and even before.

“We think N. Macedonia is ready to start accession negotiations. I hope that talks between North Macedonia and Bulgaria will produce results, but we’re focused on European integration. It’s crucial that implementation of reforms and European integration efforts resume. It’s clear that you are ready for membership. I hope that the decision is made later this year or as soon as possible, backed by all 27 EU member states including Bulgaria,” Kofod told reporters after meeting with counterpart Bujar Osmani.

The two minister discussed on Wednesday North Macedonia’s European file, as well as those of other Western Balkan countries and issues related to international relations and security, like the situation in Afghanistan and countries’ efforts to take in Afghan civilians.

Interlocutors also talked about bilateral relations, focusing on economic and trade cooperation and ways to improve it.

Macedonia is the first stop in Kofod’s tour of the Western Balkans.