Home Macedonia Mickoski: Zaev says that I don’t have an opinion on important issues,... 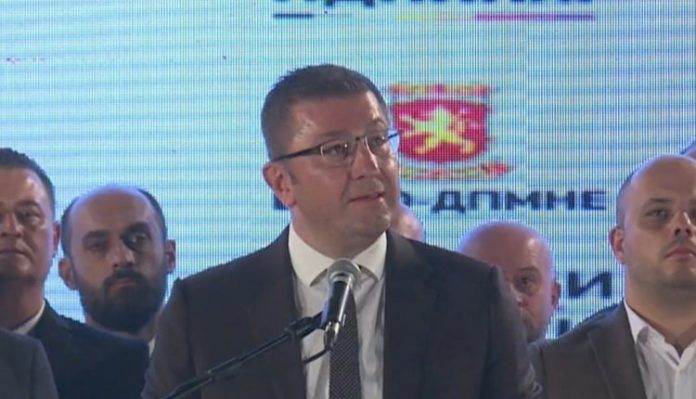 VMRO-DPMNE leader Hristijan Mickoski from the Resen campaign rally where he seeks the support of the citizens for the candidate Jovan Tozievski, responded to the leader of the Social Democratic Union of Macedonia Zoran Zaev, who mentioned him at yesterday’s rally from Pelagonija, saying that he will never have a treacherous and quisling attitude towards important Macedonian issues like him.

Mickoski pointed out that in the absence of an offer to the citizens, as in the previous elections, he expected them to be the main topic of his party rallies.

“Like all previous elections, I expected these to be the main topic of Zoran Zaev’s speech, a few minutes have passed since yesterday’s rally and he had not mentioned me yet, but after ten minutes I hear him mention me. I was like this, I was like that, so he says I did not have an attitude. What attitude should I have, like his, treacherous, capitulating, quisling! I will never have such an attitude,” said Mickoski.

Mickoski stressed that at leadership meetings in the Club of MPs, in the presence of Vice President Aleksandar Nikoloski, Zaev assured them that they should accept the humiliation offered to the Macedonian people and Macedonian citizens and accept to make changes.

He added that Zaev changed the name of the country, humiliated the people, humiliated every single citizen, stole their dignity, so that he could then steal, thinking that he would steal so much that come elections, he would distribute part of what was stolen to the people and buy back the support and affection of the people.

But, Mickoski added that it will not happen on October 17, because the Macedonian citizens will give massive support to the candidates for mayors and lists of councilors of VMRO-DPMNE.