Home Macedonia Mickoski on the AA/A coalition: We shook hands and in these elections... 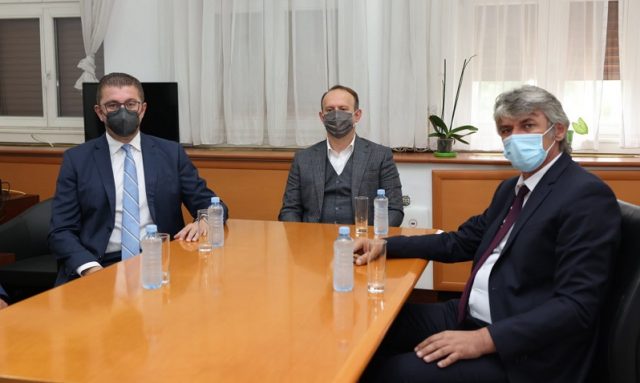 SDSM does not have a coalition at the local level, claims VMRO-DPMNE leader Hristijan Mickoski.

“They have a coalition at the central level, but they also have a coalition with the Besa Movement and the Democratic Party of Albanians and the Democratic Union for Integration, but when it comes to this election, for the election of mayors, let’s say in Tetovo – and SDSM has its own candidate and Mrs. Teuta Arifi is from DUI, and Sadi Bexheti from DPA and Bilal Kasami from Besa. The situation is similar in Struga. I want to say that there is no formal support there, said VMRO-DPMNE leader Hristijan Mickoski in an interview with TV21.

The opposition leader said that they are a step forward in this election because they clearly define their position and support for a certain candidate.

“You will ask Zoran Zaev whom you support in Tetovo, Struga, Gostivar… We are a step forward, because we clearly define our position and support for a certain candidate who we appreciate deserves the support of those people who identify with VMRO- DPMNE. Therefore, having in mind all this, I appreciate that the future should not compromise with the wrong things of these 30 years. We have taken it, let’s see how we can offer hope to the citizens instead of defeats,” Mickoski said.