Home Macedonia Mickoski: Local elections were seen as a referendum against the Government and... 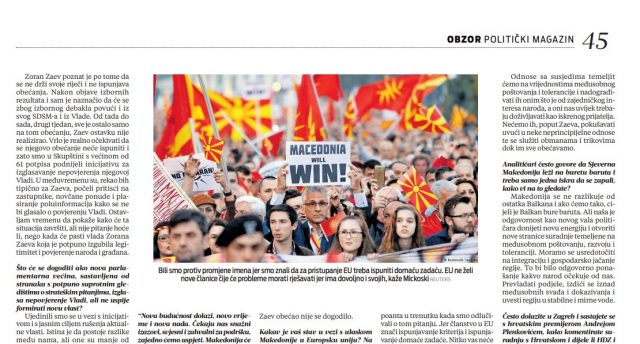 VMRO-DPMNE leader HristijanMickoski in an interview with the Croatian newspaper Vecernji List asked what will happen after PM ZoranZaev’s resignation following DanelaArsovska’s victory in the elections, who was backed by VMRO-DPMNE, , he answered that the Government did not lose only in Skopje but in most municipalities in Macedonia.

“The resignation comes because of DanelaArsovska’s victory in Skopje, but also because of the victory in the other 42 municipalities where VMRO-DPMNE and the coalition achieved certain and convincing victories, thus the lead in favor of VMRO-DPMNE practically delegitimized the Government led by ZoranZaev.” said Mickoski.

Mickoski added that the Government lost in all major cities across the country.

“In a way, primarily because of the behavior and the stake made by ZoranZaev himself who said that if he loses the elections, then he would politics, these elections were seen as a kind of referendum against the current Government, and the results showed convincing defeat of Zaev and victory of VMRO-DPMNE,” said Mickoski.