Home Macedonia Mickoski: It is not European value and diplomacy if you kneel 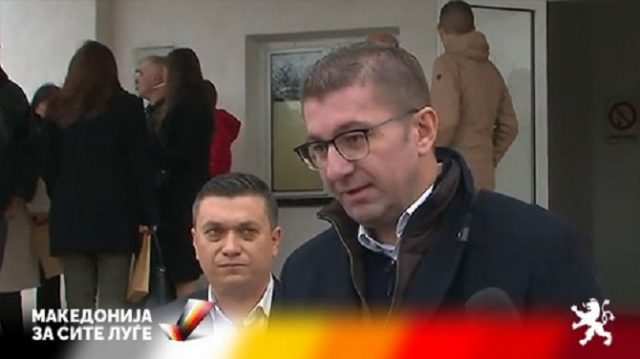 This Government led by ZoranZaev and SDSM is a government that has seriously endangered the European integration process of Macedonia with the adventurous policy it pursues in diplomacy and unfortunately we are now in this situation. The people do not deserve this, but deserve to start negotiations with the EU, because that is the only way to prove that we are competitive and that we deserve a place at the same table on an equal footing with EU countries, said VMRO-DPMNE leaderHristijanMickoski during a visit to municipality of Gradsko, asked about the new blockade from Bulgaria.

Mickoski stressed that the national concessions offered by Zaev and this government, ‘we see that they have no end, because the demands of our eastern neighbor are also great and are practically a result of the adventure policy that our government has in recent years’.

“Now there are new proposals for 6 months of negotiations, new talks at the level of commissions, but no one is telling the truth, and the truth after being interpreted differently by the new Bulgarian Prime Minister was told by several Bulgarian politicians, including Dzambaski who is the biggest Macedonian hater in the Balkans, they said what lies behind the blockade. It is that they consider Macedonia as a second Bulgarian country and that until the Bulgarian resolution is partially or fully adopted, we will not have the opportunity to start negotiations with the EU,” Mickoski said.

“It is not European value and diplomacy if you kneel, but you should show attitude and stick to the red lines. You should work at home and have a low level of crime, and not be caught with a ton of drugs being smuggled, so that there can be investments, a moving economy, competitive education, a reformed health system,” said Mickoski.