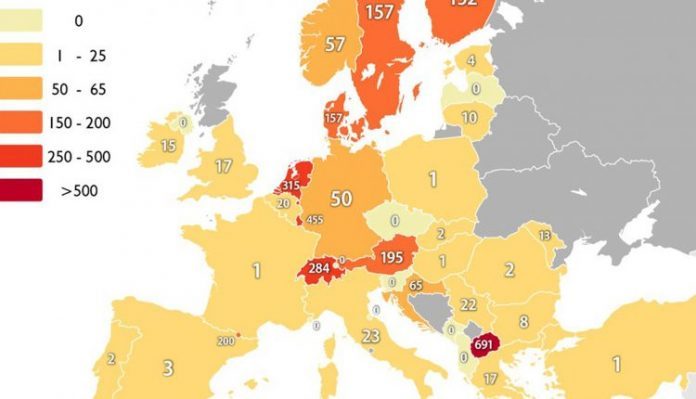 Macedonia ranks first in Europe in terms of the number of inmatesthat escaped per 10,000 inmates, according to data published on the website landgeist.com, citing Council of Europe Annual Penal Statistics.

An index of 691 would mean that 140 inmates escaped from the country with a total capacity of 2,000 inmates in 2020, which is strikingly higher than our neighbors. In second place in Europe is the Netherlands, with 315 prisoners, which is half of our number, followed by Switzerland with 284 people.

For comparison, our neighbors have an index of 0 to 22 escaped prisoners per 10,000 people, and in the region Croatia stands out with an index of 65, which is ten times lower than the Macedonian index.

What’s strange is that on the map in neighboring Albania, Montenegro, and even Slovenia there are no escaped inmates at all. This is because these countries, at least formally, have not reported escapes from their prisons.

As a consolation, Macedonia is in the European average of 80 to 100, when it comes to how many inmates there are per 100,000 inhabitants. The country has 102, or about 2,000 inmates per 2 million inhabitants.