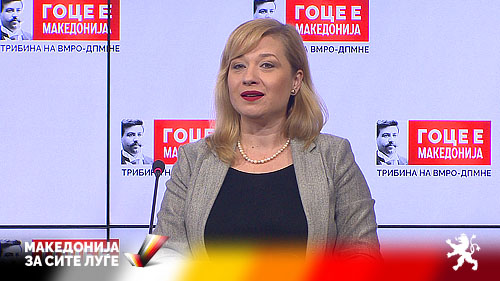 The VMRO-DPMNE parliamentary group, as you know, has already submitted to the Parliament a Declaration on the occasion of the 150th anniversary of the birth of Goce Delchev. We believe that this declaration should reflect the unity and unification of political parties in the Macedonian Parliament but also the unity of the entire Macedonian society around the undisputed Macedonian hero and leader in the liberation of Macedonia and the idea of ​​an independent state, said Ivanka Vasilevska, MP of the VMRO-DPMNE Parliamentary Group.

Only by unity, dignified respect, celebration and commemoration of the achievements of our ancestors in the past, can we further strengthen the democratic foundations of the state and society.

“We want to emphasize that although on the day of the 150th anniversary of the birth of Goce Delchev we announced this Declaration and it has already been submitted to the Parliament, we have three days of silence from SDSM and other political parties in Macedonia,” says Vasilevska and adds:

“I take this opportunity to call on SDSM and other political parties in the Macedonian Parliament to declare their official position on this important Declaration and to show that the character and work of Goce Delchev as a teacher, a national tribune and a revolutionary for cooperation, tolerance and for coexistence and how it deserves to be adopted from such a declaration in the legislature, which together we will show our respect for this central figure in Macedonian history. Let’s unite and bring this Declaration on the occasion of the 150th anniversary of Goce Delchev’s birth and show that for such important characters in our history we know how to be together and united,” said the MP.