Home Macedonia Nikoloski sends message from Strasbourg: EU to set a date for the... 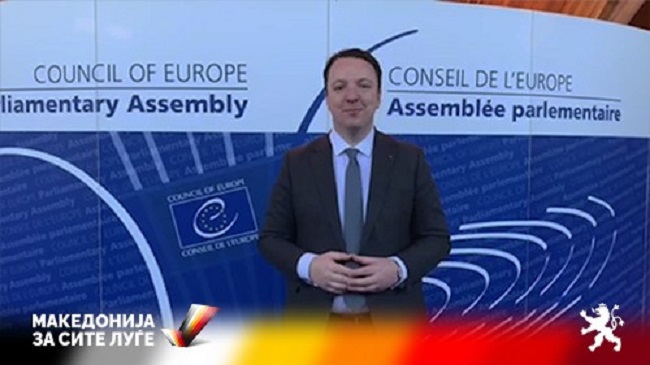 An extraordinary session of the Parliamentary Assembly of the Council of Europe is being held in Strasbourg in the next two days. The main topic is the war in Ukraine and all the accidents that are happening in Ukraine. Numerous lives have been lost, many goods have been destroyed, and there are already tens and hundreds of thousands of refugees. This military conflict, this war aggression, this war must stop. And that’s the basic thing we’re discussing here in Strasbourg. It is also considering excluding the Russian Federation from its activities in the Council of Europe due to the hostile actions it is taking, says VMRO-DPMNE Vice President AleksandarNikoloski.

“Therefore, while I’m here in Strasbourg, I urge the EU to set a date for the start of accession talks between Macedonia and the EU as soon as possible because it is only a path to democracy and respect for basic human rights.

We leave aside the differences, in Macedonia there is a government that is completely incompetent, which does not know how to deal with the economic and political crisis. But these are things we will discuss at home. What is important is that the EU sets a date for the start of accession talks with a protected Macedonian national identity and a protected Macedonian language,” added Nikoloski.