Home Macedonia Nikoloski in Strasbourg: Macedonians are not a product of the Comintern, we... 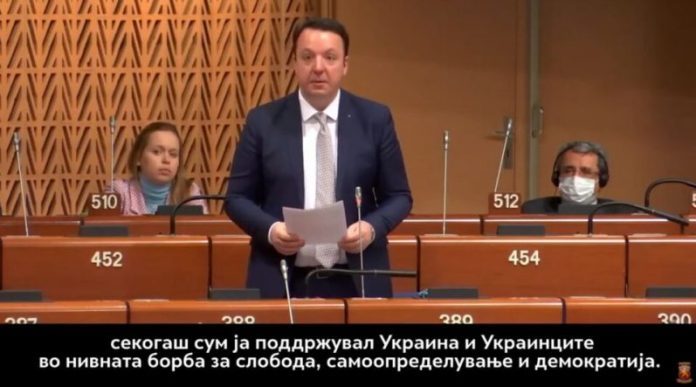 Since the start of the aggression and annexation of Crimea in 2014, I have always supported Ukraine and the Ukrainians in their struggle for freedom, self-determination and democracy. In the 21st century, when the world is talking about new technologies, a green agenda and the development of space exploration, no one could have imagined war. War in Europe is the scariest thing that could have happened. Therefore, I strongly support Ukraine and that is why we should adopt this report tonight on the consequences of the Russian aggression against Ukraine, said VMRO-DPMNE’s Aleksandar Nikoloski during his address in Strasbourg.

“For the past two days, I have been hearing from our Ukrainian colleagues about the suffering they are facing. Listening to these shocking testimonies, I can only draw a parallel with the fate and denial of the Macedonian people, and the centuries-old disputes with our neighbors that have been and are bigger and more powerful. For centuries, our neighbors have challenged the Macedonians as a separate nation, culture and language. We were victims and expelled during the Balkan Wars and during the Greek Civil War, and finally challenged in the 21st century. The denial of the Ukrainian language and the thesis that the Ukrainian nation is the work of Lenin and the communists is similar to the thesis of the denial of the Macedonian nation and language and the thesis that the Macedonians are the work of Tito and the communist Comintern. Disputing and disparaging the two nations and languages ​​has many similarities and symbolism, even the same words are used. This was not a coincidence, that even the great philosopher Francis Fukuyama, author of the legendary “The End of History and the Last Man” says that there are many similarities in the narratives used against Macedonia and Ukraine and the denial of Macedonians and Ukrainians,” said Nikoloski.