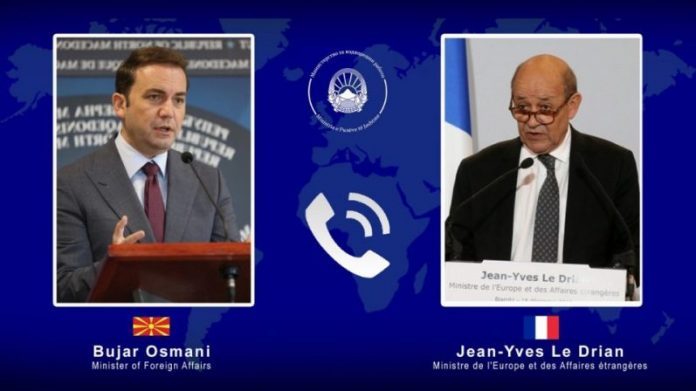 The focus of the conversation was the European file of Macedonia, in light of the current French presidency of the Council of the European Union and in that direction on the potential of this presidency for progress in our European integration. They also talked about the course of the political dialogue with the Republic of Bulgaria and of course the situation in Ukraine and how they are reflected in the Western Balkan countries, on the stability and security of the region and Europe as a whole.

Minister Osmani congratulated his French counterpart Le Drian on his leadership of the French Presidency of the Union in these difficult times, emphasizing that the unification of the EU encouraged the entire democratic world, and especially the countries in the region. During the telephone conversation, clear and unequivocal messages of support were received from France; messages about our readiness to start accession talks, as well as the role of France in this process.

During the conversation, Osmani informed Le Drian that Macedonia has achieved 100% compliance with the Common Foreign and Security Policy and in that context stressed that the European perspective of the country and the region is an essential contribution to sustainable regional and European stability.