The opposition VMRO-DPMNE has a convincing pre-percentage advantage over the ruling SDSM, according to a telephone poll by the Skopje-based Institute for Political Research (IPIS), the results of which were published on Sunday. 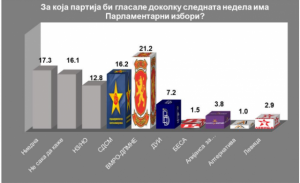 As for the Albanian parties in Macedonia, the Democratic Union for Integration (DUI) holds the lead, which has almost identical support as its leader Ali Ahmeti of 7.2 percent. DUI is followed by the coalition partner Alliance for Albanians and Alternativa with separate ratings of 3.8 and 1 percent, respectively. The BESA movement, on the other hand, is supported by 1.5 percent of respondents. 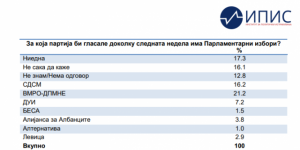