Home Macedonia Is MoI silent about Arif Asani’s involvement in the shooting in Chair... 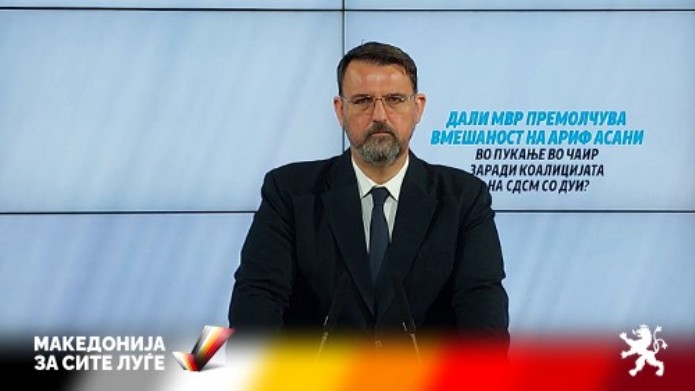 Instead of a guarantor of security, the Ministry of Interior of the SDSM/DUI government is a source of crime and clashes with firearms in the middle of Skopje, said VMRO-DPMNE spokesperson Naum Stoilkovski at a press briefing on Wednesday.

“The Ministry of Interior of SDSM/DUI is silent and does not reveal whether the involvement of the Deputy Director of the Public Security Bureau Arif Asani in a shootout between police officers with positions is correct. Does the Ministry of Interior keep silent about facts and hide arbitrariness that puts lives in danger only if the SDSM coalition with DUI survives? The Ministry of Interior of SDSM/DUI is silent whether and whether it is possible to allow a person to have physical contact with police officers, to shoot in front of police officers for stopping a car, and the one who fired to be released with the assistance of the deputy director of the PSB? And all this should happen in front of a restaurant, around 8 pm, in the middle of a boulevard, at a high frequency of people?” said Stoilkovski.

“Instead of a source and guarantor for the security of the citizens, the Ministry of Interior has become a source of insecurity! People witness how in the middle of the boulevard, a man shoots in the presence of the police for controlling a vehicle, and then the second man in charge of public security is released due to the possible intervention of Arif Asani,” added the opposition spokesperson.