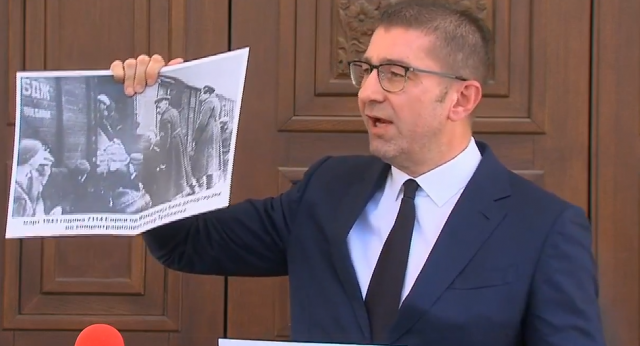 The constitution will not be changed and the negotiating framework will not be accepted, announced the leader of the opposition VMRO-DPMNE Hristijan Mickoski, immediately after the end of the Parliament session where the conclusions on the French proposal were voted.
Mickoski showed documents to the cameras that the MPs from the opposition signed and notarized, with which they promise not to accept changes to the Constitution.
“I want it to be known loud and clear that nothing is over, and the people must not despair. The fight goes on and we will win. The information that passed in the Parliament today has no meaning because the framework is adopted by the Government. Therefore, the obligations arising from the negotiation framework, which is a change to the Constitution in order to bring in the Bulgarian people, will not pass in the Macedonian Parliament. VMRO-DPMNE and the coalition are a guarantee for that. The people can rest easy. This is not 2019,” Mickoski said.