Home Macedonia Lefkov: New details of the Broilo scandal – The company of Kovachevski... 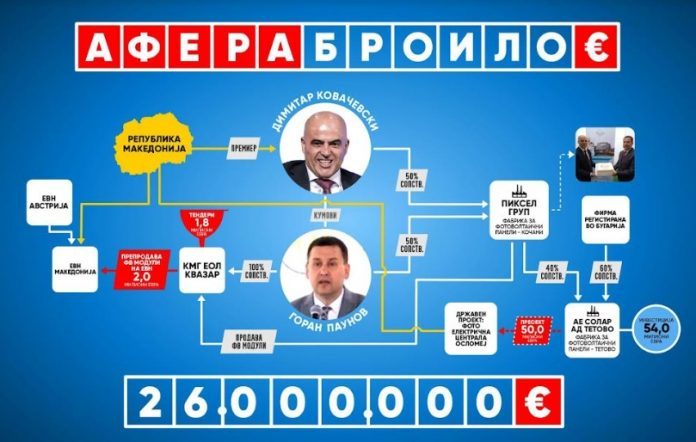 The Solar Cartel composed of Kovachevski and his best man Paunov was created and started turning over millions of euros with the arrival of SDS in power. DimitarKovachevski is permanently unfit for the military, but he is permanently fit for tenders, commissions and cartel association, noted at today’s press conference Mile Lefkov, MP and member of the VMRO-DPMNE EC.

The scandal, says Lefkov, shows us how a small group deeply embedded in the highest structures of government traded influence for their own benefit.

“Prime Minister and defector DimitarKovachevski and GoranchoPaunov founded Pikcell Group on November 3, 2017, 5 months after SDS formed the government. Pikcell Group, founded by Kovachevski and his best man Paunov, in the past 5 years has become the central company around which 26 million euros of the Solar Cartel revolve. The second company that appears as a contractor is KMG EOL Kvazar, founded by Kovachevski’s best man, Paunov. There were many state tenders for Paunov’s company, which is part of the scandal. Kovachevski’s best man used to get a job from the state, and today it is Kovachevski who manages the government. KMG EOL Kvasar receives the largest number of contracts. Namely through KMG EOL Kvasar, since SDS has been in power, 2 million euros of state tenders have been taken,” said Lefkov.