Home Macedonia Mickoski: Zaev cannot be a reformer with such criminal concession in his... 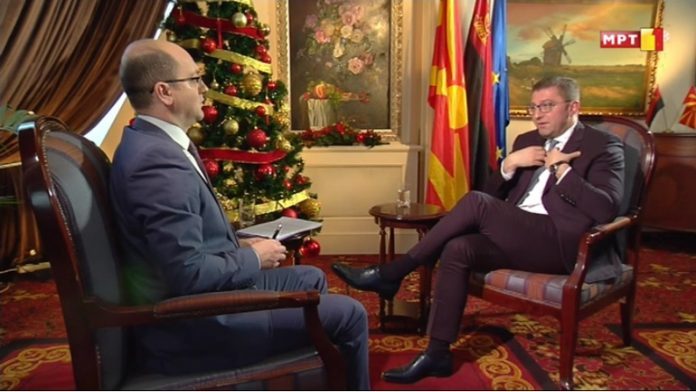 VMRO-DPMNE leader Hristijan Mickoski was a guest on Friday night’s MRT New Year’s interview, pointing out that Prime Minister Zoran Zaev could not be a reformer because he had a “criminal concession” in his past.

“One who has a criminal concession in his past cannot be a reformer. I can be a reformer because I don’t have a criminal past, someone else who doesn’t have it can be, as well. A man who has been deeply involved in criminal scandals, whether it be Global or Coup, bribery, etc. that man cannot be a reformer. That’s impossible.
A reformer can be a man who is always on the side of the law. I pledge, you can keep this recording, if you see a third pale copy of that Swarovski or this Louis Vuitton judiciary, I am ready to resign and say that I failed in my first attempt to secure justice, and independence, of both the law and the judiciary,” he said.

Mickoski pledged to citizens that judicial reform is one of the historic moments he will implement.

Ali Ahmeti’s statements that a condition for a coalition with the DUI is compliance with the Treaty with Bulgaria and the Prespa Agreement for the VMRO-DPMNE president are not a cause for fear because, in his view, it is a political pre-election maneuver.

“A priori does not define the terms of coalition. Maybe it will not be the political option that will be in coalition with VMRO-DPMNE because we will not be able to find a common language on other issues,” Mickoski said.

Regarding the post-election coalition with some of the Albanian parties in Macedonia, Mickoski stressed that the compatibility of the programs would be crucial with whom VMRO-DPMNE would coalition after the victory. According to him, it is crucial that the party that would coalition with VMRO-DPMNE strives for uncompromising fight against crime and corruption, respect for the laws and the Constitution of course, intensive and hellish work for rebuilding Macedonia.

“It is absolutely our position that our program will coalition with the compatible program after these early parliamentary elections and VMRO-DPMNE will win, the party win the largest number of MPs and it will win with great results. There is no dilemma, or I have ever had a dilemma and as we started this TV show, no one in the Macedonian public has a dilemma for the victory of VMRO-DPMNE. We will make a coalition with the political entity where we will approach our positions and that uncompromising battle with crime and corruption, compliance with the laws and the Constitution of course, intense, hell-bent work with a lot of effort, with a lot of own energy spent on rebuilding the country , because this information we have is really cataclysmic, at the level that institutions are now,” he added.