Home Macedonia Mickoski satisfied with the meeting with Ahmeti – DUI leader accepts the... 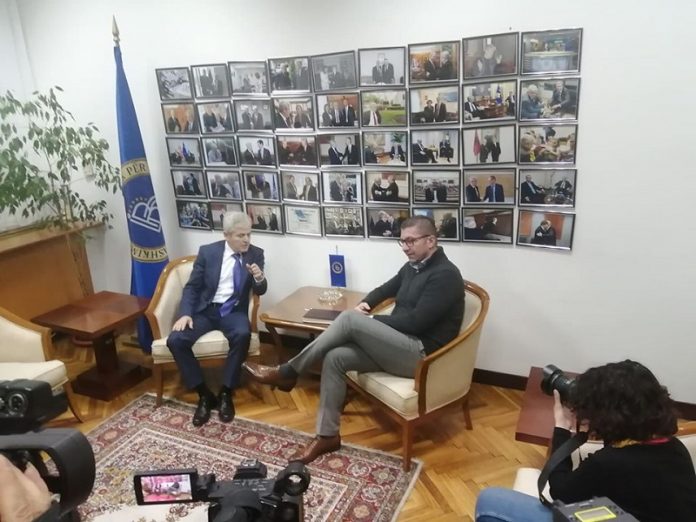 After the meeting with Ali Ahmeti, Hristijan Mickoski stated that they had a successful meeting, and that he presented VMRO-DPMNE’s proposal for interim MoI minister.

“According to the practice and the law, today I had a brief but successful meeting with Ahmeti where we discuss the staffing solution for the MoI, i.e. the profile of the person we are proposing. I expect that we will also have a successful meeting with the outgoing Prime Minister and we will reveal the name of the Minister immediately after the meeting. It is a professional solution,” Mickoski said.

The MoI candidate is a professional solution; we will reveal his name after the meeting with Prime Minister Zoran Zaev

VMRO-DPMNE’s interior minister in the interim government is a professional solution, but his name will be known after the cabinet meeting, VMRO-DPMNE and Hristijan Mickoski said after consultations with DUI leader Ali Ahmeti, who later left for a meeting with Prime Minister Zoran Zaev.

Ahmeti, much like Mickoski did earlier, without revealing the name of the proposed candidate, said he was a proven professional who was not known as a political activist in civilian life. DUI’s leader estimates that this would be a good solution for both the Ministry of Interior and for peace and security. He hopes that this solution will be acceptable for SDSM as well, but leaves it to Mickoski and Zaev to decide.