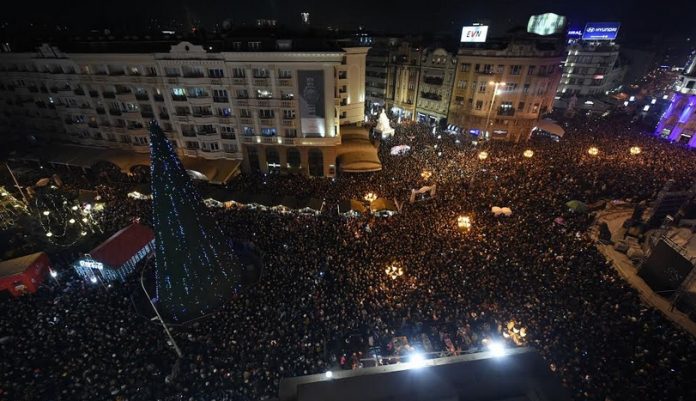 In the event organized by the City of Skopje, over 60,000 people from North Macedonia, including tourists from abroad, rang in 2020 in Skopje’s main square at a concert by Bosnian singer Dino Merlin.

The cheerful atmosphere of singing his hits on New Year’s Eve was further enhanced the stage lasers and multi-minute fireworks that marked the beginning of the New Year. Citizens in merry mood wished each other good luck, good health and success in the New 2020.

The New Year’s Eve party in the heart of Skopje began at 8:30 pm yesterday with the performance of the Gypsy Groove and Superhiks bands that warmed up the atmosphere on a chilly New Year’s Eve and announced Dino Merlin’s New Year’s Eve show.

Macedonia Square has been the center of the New Year and Christmas celebrations in Skopje during this past month, and citizens have had the opportunity to experience the holiday magic and enjoy a variety of entertainment programs.

The biggest interest among the visitors was aroused by the digital Christmas tree, as well as the New Year’s homes in the Winterland neighborhood, which were located between the GTC and the main square. Near the cottages there was a small stage where events and concerts for different ages were organized daily.