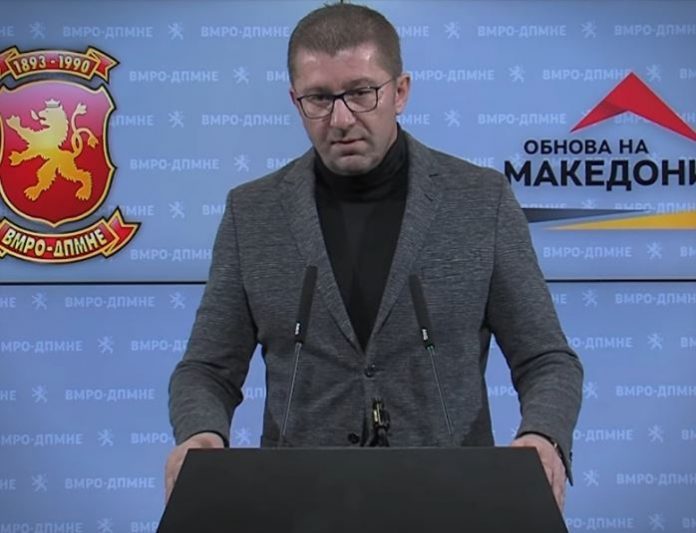 VMRO-DPMNE leader Hristijan Mickoski expects the new interim ministers to work hard, strictly and strictly according to the laws, to protect the laws and the constitution, and within their abilities and powers to do something for the citizens in the next one hundred days.

At a press conference Saturday, he said that they have serious indications of abuse and violation of laws and powers in the last days of Zoran Zaev’s term, and that it will be presented and revealed to the public.

“I expect work only under the laws. I expect of them to protect the laws, to protect the Constitution of Macedonia. Of course, within their capabilities and powers in these hundred days, to do something for the citizens. Strong, hardcore and hard work during these hundred days, and then after the victory on April 12 and the new VMRO-DPMNE government, we expect to strongly press on and make Macedonia a country that we will all be proud of, not ashamed of,” said Mickoski.

Asked why the two VMRO-DPMNE ministers did not attend President Stevo Pendarovski’s reception, Mickoski said there was no usual practice for the ministers to attend and that he assumed that they had decided to devote their cabinets.

“It is not common practice for ministers of their choice within Parliament to visit Pendarovski. I guess guided by that unusual practice they decided to devote themselves to staffing their cabinets, making a plan for their work activities over the next 100 days,” Mickoski said.

Concerning the SDSM’s accusation of hypocrisy and false patriotism that they have no problem with the new name North Macedonia when it comes to functions, Mickoski said that he had never seen a press conference to use the new adjective.

“We would be hypocritical if we ignored this reality. But this is the first step towards defeating this reality and working hard to change that reality in the future. If you think we will ignore that reality, then you would be hypocritical, as the SDSM top officials have been doing lately, where until yesterday their mouths were full of new adjectives, and today their Facebook profiles are just Macedonia. It is hypocrisy, not what we do, where we are trying to beat this dirty system and unfortunately this reality that we cannot ignore, said Mickoski.

Asked if the establishment of the caretaker government has met all the conditions for holding elections or leaves room for postponement, Mickoski said he did not leave room for these elections to be postponed, but said a fair and democratic process jeopardized institutional violence over the past few weeks in which illegal redistribution, appointment, and systematization solutions were adopted.

“We are still a party with blocked property. Illegally frozen property, which is virtually unavailable to us as a political party so that we can provide a way to go to the polls. But even as we are, we are much more motivated and want to leave our hearts on the court, because we know that this time the main investment is Macedonia. We will defeat them, and then you will see what a fair and truly democratic society means, not a society with false and corrupt criminal values, “said Mickoski.